SINGAPORE - A total of 23 food and beverage outlets were caught flouting Covid-19 safe management measures during stepped-up checks by government agencies over the weekend.

Many of these breaches involved groups of more than five people seated together or mingling between tables, as well as serving and consuming alcohol past 10.30pm, the Ministry of Sustainability and the Environment (MSE) said in a statement on Tuesday (Sept 15).

A total of 149 F&B outlets in known hot spots were inspected over the weekend. Police officers were also involved in the checks.

The MSE said that the agencies are reviewing the breaches and "appropriate enforcement actions will be taken, including temporary closure of the outlets and the issuance of fines".

This comes after Education Minister Lawrence Wong, who co-chairs the multi-ministry Covid-19 task force, said last Wednesday that enforcement agencies will be stepping up checks on F&B outlets that flout Covid-19 rules.

He said that while most people are complying with these measures, “there are still a few breaches that we pick up on a daily basis, and they typically happen at popular nightspots”.

Minister for Sustainability and the Environment Grace Fu said in a Facebook post on Tuesday that Covid-19 remains a grave threat and breaching safe management measures is a serious offence.

“I urge F&B operators and patrons to observe measures for our collective safety,” said Ms Fu.

Examples of breaches include an F&B outlet in Chinatown which accepted a booking of 10 customers and seated them at two tables within a private dining room. When asked if the customers at the two tables knew one another, outlet staff claimed they did not.

Another F&B outlet at Orchard Road was found to have served alcoholic drinks from metal teapots past 11pm to 13 customers. Investigations found that the teapots contained beer, and the bottles of beer sold by the restaurant were concealed at the bottom of the fridge. 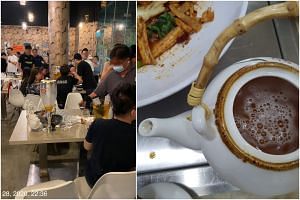 Restaurants and bar shut for flouting Covid-19 rules, including pouring alcohol into teapot to avoid detection

Also in Orchard Road, six people were caught drinking at an F&B outlet around midnight. Enforcement officers had heard loud conversations from the premises, which were locked. They warned the F&B operator to open the door, but found no sign of drinks on the table.

Closed-circuit television footage later showed the customers and owner clearing the glasses and hiding the alcohol bottle just before opening the door to allow the enforcement officers in.

Last Wednesday, Mr Wong announced that F&B outlets and diners who breach safe management measures will now be penalised even for the first offence, instead of receiving warnings when they first do so.

The move kicked in with immediate effect, the Ministry of Health said in a statement on the same day, as there has been sufficient time for F&B outlets and their customers to adjust to the rules.