SINGAPORE - A total of 225 errant users of Personal Mobility Devices (PMDs) have been caught riding illegally on roads this year, the Land Transport Authority (LTA) said on Saturday (April 28).

All of the devices were e-scooters and were impounded. LTA said its Active Mobility Enforcement Officers have conducted about 870 enforcement operations islandwide.

The authority said in its Facebook post that it takes a serious view of users who ride their devices recklessly "as their actions endanger themselves and other road and path users".

It added that riding PMDs on roads is an offence. If convicted in court, first-time offenders can be jailed for up to three months and/or fined up to $2,000.

LTA had on Jan 15 this year increased its penalties to deter errant use of PMDs.

It increased the previous composition fine of $100 to $300 for first-time offenders who ride on local roads.

Those who ride on major roads for the first time face a $500 composition fine.

Those who ride on expressways will be charged in court, and PMDs will continue to be impounded during investigation. 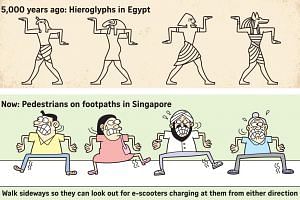 PMDs do not include electric bicycles, which are to be ridden on roads and not on pedestrian pathways.

The latest statistics come after a series of accidents involving e-scooters recently.

On April 21, a 49-year-old e-scooter rider was taken to hospital after an accident with a taxi in Bukit Timah.

On April 17, a 65-year-old woman said she was knocked down by an e-scooter rider in Ang Mo Kio. A 15-year-old suspect was subsequently identified.

That same day, a 26-year-old e-scooter rider was hurt after he collided with a car near Kembangan MRT station.