SINGAPORE - The average Singapore household throws away about $170 worth of food and beverage a year, amounting to more than $200 million annually, according to a latest survey commissioned by appliance maker Electrolux Singapore.

The survey results, released on Monday (Oct 16) in conjunction with World Food Day, also showed that 85 per cent of households do not consume food before the indicated date on the packages, contributing to a growing food waste problem in Singapore.

Food waste accounts for about 10 per cent of the total waste generated in Singapore and has increased by more than 40 per cent in the past 10 years.

The survey commissioned by the Swedish company last month (Sept17) polled 1,000 households and was part of the company's annual community initiative since 2015, called #HappyPlateSG, to raise awareness on food waste.

The people polled were aged between 18-65, and were representative of the population according to factors such as household income, household size, and age group.

The survey showed that 72 per cent of households know that food that has passed by its expiry date did not necessarily mean it is unfit for consumption. 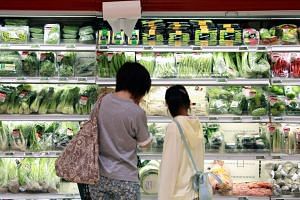 The ST Guide To... food safety

They could attribute the meanings of "Best Before", "Sell By" and 'Expires On", which mean: a guide to how long a product can retain its peak quality and freshness; a reference for sellers to let them know how long an item can be displayed for sale; and to indicate when there's a health risk in eating an item after that date respectively.

Separately, 58 per cent said they would continue eating the product if it were frozen, vacuum sealed and stored well, and showed no signs of turning bad.

When told of the amount of food waste generated by the country, 84 per cent were shocked, guilty, sad or angry while 10 per cent said they were indifferent.

Households polled were more cautious in consuming dairy, meat, and seafood products that have passed their expiry compared to dried goods.

Mr Douglas Chua, general manager of Electrolux Singapore, Hong Kong, and Taiwan, said that the focus for this year is on food in storage. It was the third time the survey was done, with the focus in past years being on food that looked 'ugly' or unappealing for consumption, and on reasons for wasted food in homes.

"Often, we buy food, store them, but end up forgetting to consume them before their indicated dates on the packaging. This results in their eventual disposal."

"We want to encourage behavioural change that will allow for greater food sustainability and reduced waste."

Mr Eric Low, chef-owner of culinary consultancy Lush Epicurean, said: "Managing food nearing or have passed the indicated date is on a case-by-case basis. Different categories of food do not deteriorate at the same rate.

For more information about the initiative and the survey results, visit the microsite happyplate.sg.