SINGAPORE - Two Singaporean youths have been arrested under the Internal Security Act for terrorism-related activities, the Ministry of Home Affairs (MHA) said in a statement on Wednesday.

The first, post-secondary student M Arifil Azim Putra Norja'i, 19, had made plans to join the Islamic State in Iraq and Syria (ISIS), and if he was unable to join the terrorist group there, planned to strike here.

Arifil is the first known self-radicalised Singaporean to harbour the intention to carry out violent attacks in Singapore, the ministry said.

The second radicalised Singaporean, a post-secondary youth, 17, was arrested earlier this month for further investigations into the extent of his radicalisation.

He was not named.

The arrests come amid growing concern in the region and beyond that youths are being radicalised by ISIS, with security agencies in South-east Asia and elsewhere stepping up their guard and arresting individuals trying to leave for Syria to join a growing pool of over 20,000 foreign fighters.

Many of them were radicalised on the Internet.

In its statement, MHA said its investigations showed that Arifil's radicalisation began around 2013 when he started viewing terrorist propaganda online.

Arifil grew to support the radical ideology and violent tactics of ISIS, and befriended individuals online who he thought could help him join the terrorist group.

It was also revealed that Arifil had actively looked up travel routes to Syria on the Internet and researched ways of making improvised explosive devices.

"More importantly, Arifil also revealed that if he was unable to join ISIS in Syria, he intended to carry out violent attacks in Singapore. He gave considerable thought to how he would attack key facilities and assassinate government leaders," MHA said.

If he was unable to execute those plans, Arifil had planned to carry out attacks in public places, with weapons such as knives, in order to strike fear within society, it added.

MHA said Arifil had tried to recruit several people to help carry out the attacks, and while they were not swayed by Arifil, they did not alert the authorities about the plans either. 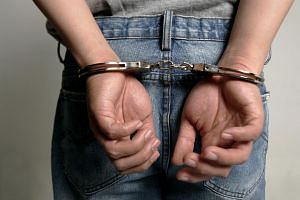 Self-radicalised Singaporeans who were previously detained

"Fortunately, another person who knew Arifil noticed the changes in him, and had brought him to the attention of the authorities, who were then able to investigate the matter and take action before he could carry out his violent attack plans in Singapore," it added.

As for the second youth arrested, MHA said his family had been informed of his arrest and would be kept informed of the outcome of the investigations.

In its statement, the ministry emphasised that the family, friends and members of the public as well as religious institutions play an important role in protecting fellow Singaporeans from radicalisation and engaging in terrorist activities.

It noted that recent reports showed how young people in other countries had become so deeply radicalised by extremist propaganda that they are prepared to undertake acts of violence at home and abroad.

"These two young Singaporeans who have been radicalised demonstrate that young persons in Singapore can also become radicalised in particular through the Internet," MHA said.

Mr Edwin Tong, deputy chairman of the government parliamentary committee for Home Affairs and Law, said the arrests were "a stark reminder that we are not insulated from what happens around the world".

"Youths today are very impressionable, not yet mature enough to differentiate what are ideals and what is practical and reality. They are highly connected to the Internet, they are tech-savvy. This story brings home the fact that we cannot take it for granted," he added.

To protect the young from the danger of radicalisation, Mr Tong said the "best defence is our society and people around us".

"It's about being close to them, know what they are reading online, and observing any change of behaviour," he said.

"Our community leaders have worked hard to counter radical ideology. We should all, from all communities in Singapore, support each other in this effort. The Government will also provide more support to community groups to do more. All of us have to work together to overcome this issue together," he said.

"All of us must play our part. If you know or suspect anyone who is becoming radicalised, please notify the authorities early. You would be helping to save that person from harming himself and others.

"Our security agencies will do their utmost to detect and prevent any terrorist attack. However, as we have seen in other countries, an attack can still happen even in countries that are already on high security alert.

"We must strengthen our community resilience so that if an incident were to occur here, we can recover and emerge even stronger and more united."

Minister-in-charge of Muslim Affairs Yaacob Ibrahim said the arrests serve as a reminder for "parents, religious teachers, friends and community at large" to remain vigilant.

He wrote in a Facebook post on Wednesday: "We must do our utmost to reach out to young people who are in search of answers to problems confronting their generation."