SINGAPORE (MY PAPER) - In another case of alleged cat abuse in Yishun, a cat was found seriously injured with two fractured legs last Friday (Dec 18).

According to cat activists, vets who treated it said its injuries were consistent with the recent spate of abuse cases.

This is the 18th alleged cat abuse case in Yishun in the past three months, with 16 cats dead and two injured, Chinese daily Lianhe Wanbao reported on Tuesday (Dec 22).

But just three days later, a cat named Oli was found with broken legs at the void deck of Block 170, Yishun Avenue 7, according to Facebook group Yishun 326 Tabby Cat.

It was taken to Mount Pleasant Vet Centre, where it underwent "difficult surgery that required a CT scan, with internal and external plates and pins fixed", according to the group's Facebook page. The medical bill is estimated to cost about $7,000.

The cat welfare volunteer group said in a post early Tuesday that "the prognosis is good".

In an interview with My Paper, a spokesman from animal welfare group Cat Welfare Society (CWS) warned that cat abusers "will only get bolder". She added that such acts must be curbed before they translate to harm to humans. 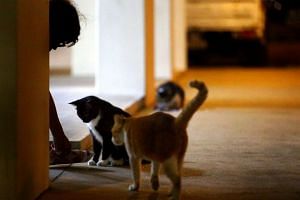 She pointed out that, to date, only one cat abuser has been punished by the law. In 2006, serial cat abuser David Hooi was jailed twice for separately torturing two kittens in Bedok. He received a three-month jail term the first time and 12 months for the second.

On Saturday, CWS held a volunteer dialogue session on how to progress animal welfare here. Mr Ng, who is the founder and executive director of animal welfare group Animal Concerns Research and Education Society, was also present.

A unanimous call was made by the participants for technologies and resources available to the police to be made available to those handling crimes involving animals.

Under the Animals and Birds Act, anyone found guilty of cruelty to animals can be jailed up to 18 months, fined up to $15,000 or both.

Members of the public with any information about the cat abuse cases may call the Agri-Food and Veterinary Authority of Singapore at 1800-476-1600, e-mail ava_cawc@ava.gov.sg or call the Society for the Prevention of Cruelty to Animals' 24-hour hotline at 6287-5355, ext 9.