"I am very pleased with the huge turnout,"said Mr Heng, who chairs the SG50 Steering Committee that oversees all the golden jubilee celebrations.

Mr Heng added that a factor that contributed to the turnout was the extra SG50 public holiday. 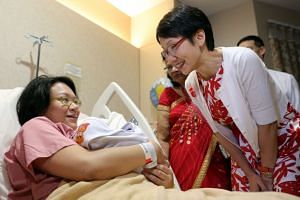 The long weekend signalled to Singaporeans that this National Day is a special one and allowed the organisers of various SG50 events to spread out the activities over several days, said Mr Heng at the sidelines of a community event at Tampines.

The early announcement of the one additional public holiday also helped Singaporeans plan for the weekend, said Mr Heng.

In March, the government made a surprise announcement by declaring Aug 7, a Friday, a public holiday, turning the weekend into a four-day break for Singaporeans.

When President Tony Tan Keng Yam declared the public holiday, he said that he had hope that Singaporeans would use the time to take part in the many activities lined up and "come together to commemorate this special milestone year in our history".

Mr Heng said that the entire event has been a success.

Many of Singapore's biggest attractions were open for free, or had a discounted entry price. These included the ArtScience Museum, the Science Centre, public swimming pools and gyms across the island.

But the free attractions also attracted huge crowds, with snaking queues of people lining up to get in.

"I am very heartened by the tremendous show of love for our country," he said of the Singaporeans who participated in the various activities over the weekend.