SINGAPORE - About 50 Woodlands residents took part in a virtual reality workshop on Saturday (March 31) to transform a park connector into a social space bustling with activity.

They were among 150 residents in three towns taking part in design workshops this weekend to help reshape the community spaces they live in. The other two towns are Toa Payoh and Pasir Ris.

These workshops are part of the Remaking Our Heartland programme, which aims to spruce up the heartland for Singaporeans.

The programme was announced by Prime Minister Lee Hsien Loong in 2007, and since then, nine towns and estates have been identified for renewal.

Punggol, Dawson and Yishun were identified in 2007; East Coast, Hougang and Jurong Lake in 2011; and Woodlands, Toa Payoh and Pasir Ris were selected in 2017.

The entire makeover of Woodlands, Toa Payoh and Pasir Ris will be implemented within the next five to 10 years. A budget has yet to be finalised.

When completed, the rejuvenation is set to benefit more than half a million residents living in the three towns. 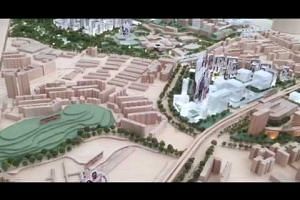 Woodlands to transform into 'star destination of the North'

The 4.2km social space in Woodlands will transform an existing park connector that runs from the east to the west of the town into a stretch with lush greenery, community gardens and new activity spaces.

It was one of six "star attractions" announced last year to revitalise the town.

The other attractions include an expansion of Woodlands Regional Centre with commercial and residential developments, and a new 1.9km community link called WoodsVista Gallery connecting Woodlands Central to the Woodlands waterfront.

At Saturday's workshop in Woodlands' Greenwood Primary School, a facilitator donned virtual reality headgear while participants gave feedback on what they wanted to see in the revamped spaces. The facilitator then virtually mapped out the suggestions.

The participants picked from 170 suggestions gathered from residents through pop-up surveys in February in the park connector that will become the social space.

Second Minister for National Development Desmond Lee and grassroots adviser Vikram Nair were at the workshop. 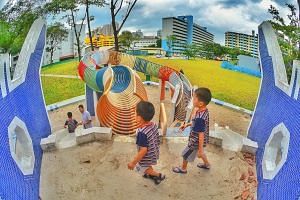 In Toa Payoh, up for virtual-reality (VR) redesign is the void deck of Block 60, Lorong 4. And over in Pasir Ris, a 5km-long Community Mall, which is an existing walking and cycling space linking amenities and green spaces, will go under the VR knife for a makeover.

The Housing Board said the use of virtual reality in the design stage allowed residents a more interactive and immersive experience, as they could visualise how their ideas could look in reality.

Once the designs are finalised, perspective photos can be easily generated from the virtual models, eliminating the need to execute manual sketches, which can take about three months to prepare, the HDB added.

The design sessions are being carried out in collaboration with students from the National University of Singapore's School of Design and Environment under the Department of Architecture, as well as volunteer community facilitators under HDB's Friends of Our Heartlands volunteer programme.