SINGAPORE - Eleven of 13 infants who were fed formula milk from a batch potentially contaminated with bacteria are reported to be well, a spokesman for KK Women's and Children's Hospital (KKH) said on Thursday (Aug 23).

The caregiver of another child who may have been given milk from the recalled batch of Dumex's Mamil Gold Infant Milk Formula - Stage 1 (850g) at National University Hospital (NUH) has been advised to monitor the child's condition and seek treatment if symptoms develop.

The Health Ministry revealed on Tuesday that formula from the implicated batch had been used at the two hospitals between Aug 1 and 20.

They have contacted parents and caregivers who may have received the infant formula.

The batch of 4,200 tins imported from Malaysia, which has been on sale islandwide since January, was recalled after samples tested positive for Cronobacter sakazakii bacteria, the Agri-Food and Veterinary Authority (AVA) said on Monday.

Products from the recalled batch expire on Sept 11, 2019, and can be identified by the batch number 09117R1 printed on the lid.

While rare, infections from the bacterium - which can survive dry conditions, such as in dry food like powdered milk - can be fatal to newborns, as it can cause meningitis or sepsis.

Infants with the Cronobacter infection, which can be treated with antibiotics, may show symptoms such as fever, poor feeding or lethargy, though no cases have been reported so far. 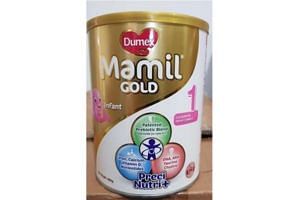 Contaminated Dumex infant milk used at KKH and NUH between Aug 1 and 20: MOH

Associate Professor Ng Kee Chong, chairman of the medical board at KKH, said that 11 of the 13 caregivers - whose children were given the infant formula while in hospital - have been contacted, and it is trying to get in touch with the remaining two.

The hospital has also stopped the use of the Dumex Mamil Gold brand of milk powder.

"Our top priority is the health of the babies," said Prof Ng, who added that caregivers should immediately consult a doctor if their infant displays symptoms or feels unwell.

An NUH spokesman said it has reviewed its records and one patient may have been fed the product, though it has not received any reports of patients experiencing symptoms related to consumption of the milk.

Worried parents meanwhile flooded Dumex’s phone line and Facebook page, with some raising concerns over product refund forms they say they were asked to sign that waive their rights to any future claims.

Civil servant Eng Yi Tan, who bought a tin from the affected batch for his five-month-old son, showed The Straits Times a copy of a product refund form that Dumex had asked him to sign.

The form, which lists the batch number and retail price of $54.50, asks for a name, identification number and signature to receive a cheque refund within two weeks.

It states that in consideration of the exchange/refund received, consumers agree to release Danone Dumex Early Life Nutrition Singapore and KWH Marketing from “all rights or claims that I may have arising from, relating to and/or in connection with the Dumex products”.

In response to queries, Dumex said that the purpose of the clause was to “avoid double exchanges and double refunds,” adding that it has reviewed the highlighted sentence and amended it to avoid any confusion. It did not say what the amended version was.

All valid requests for exchange and refunds have been fulfilled, a spokesman said, though she declined to disclose the number of tins returned.

Mr Tan, who is in his 40s, refused to sign the form. He said: “My main concern is about Dumex’s ethics... what about those parents who have already sent in their forms - will they receive new ones?”

Operations manager Jimmy Seow, 34, said that he had received an exchange for a new tin of milk powder through a courier on Wednesday and signed the form to acknowledge receipt. But he had not noticed the paragraph and was not given a copy.

Mr Seow said he is concerned about giving up his rights to future claims as “parents are not sure what side effects there may be for their children.”

Lawyer Eugene Thuraisingam said that consumers are within their rights to seek a refund from Dumex without having to sign a waiver.

“Under the law, if a product is defective, there is an obligation on Dumex to refund the money paid," he said.

"If there is any additional damage or harm caused, Dumex will be responsible for that harm over and above the refund."

If the form serves as a waiver of further rights, it is “clearly meant to circumvent further proceedings... the difficulty will arise if there is actual damage suffered that will only surface later,” added Mr Thuraisingam.

Mr Loy York Jiun, executive director of the Consumer Association of Singapore, said: “It is unfair to ask consumers to give up their rights to seek further claims for potential losses, e.g. arising from any illness to their child, when consumers are receiving a refund of the monies paid for the milk powder only.”

Until investigations are complete, Case urged Dumex not to include a waiver clause “as it may give the false impression that consumers have to waive all their rights on the matter in order to obtain a refund on a product that they have been advised not to consume”.

This is the first time a formula milk product has been recalled for failing to meet the AVA's food safety standards and requirements.