SINGAPORE - Thirteen more conserved colonial bungalows at Seletar Aerospace Park are being refurbished for retail, F&B and office use.

They will join four bungalows which were refurbished as food outlets that opened last year at the park's food and lifestyle hub The Oval.

The latest refurbishment works are expected to be completed next year and statutory board JTC has launched a request-for-interest for their use.

The move was announced on Tuesday (Oct 16) by JTC, the lead government agency behind the development of Seletar Aerospace Park - a 320ha plot of land housing Seletar Airport and a total of 32 conserved colonial bungalows, the remaining 15 of which are currently vacant.

It is also home to more than 60 multinational and local aerospace companies.

JTC said the second phase of The Oval follows positive reception for the first.

Footfall at its existing food outlets - Wheeler's Estate, The Summerhouse, Youngs Bar and Restaurant and Di Wei Teochew Restaurant can hit 3,000 people over a weekend. 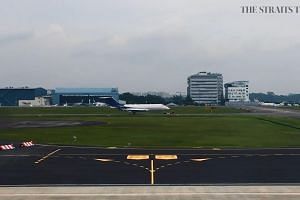 The Straits Times understands that overheads and rental for operators here can cost as much as $300,000 per month, with rent comprising a small fraction of that amount.

Seletar reportedly still houses around 130 other residential colonial bungalows, which are located outside the aerospace park zone.

Over the next three years, JTC said it plans to introduce heritage storyboards and gathering points along the existing National Parks Board's (NParks) Round Island Route for cyclists and pedestrians which runs around the aerospace park.

This leg of the route starts at Rower's Bay at Lower Seletar Reservoir Park and ends at Piccadilly Road along Seletar Aerospace Drive. This will be done in partnership with NParks, the National Heritage Board and Seletar Hills Estate Residents' Association (Shera).

JTC is also encouraging industry players and the community to sponsor trees in the area through Nparks' Garden City Fund's Plant-A-Tree programme.

President Halimah Yacob launched the event by planting a Flame of the Forest tree at Park Lane on Tuesday.

The tree produces crimson-red flowers and has been planted in Seletar since the commencement of the development of the British Royal Air Force base there in the late 1920s.

JTC's director of urban design and architecture Tang Hsiao Ling said: "By striking a balance between economic, social, and environmental imperatives, we can develop beautiful, interactive and green estates that are not only attractive destinations for business and talent, but also vibrant and inclusive spaces for the community."