SINGAPORE - A woman who successfully bid for a hawker stall with a monthly rental of over $10,000, the highest successful tender bid to date, has had a change of heart.

She ended the tenancy agreement for the stall to sell drinks the same day she signed it, said the National Environment Agency (NEA).

Calling the $10,028 bid for the Chomp Chomp Food Centre stall an “outlier”, NEA added on Wednesday (Aug 29) that it was the highest successful bid received to date.

The tender bid was made in July by Ms Lim Ah Ber for $10,028 a month to rent a stall in popular food haunt Chomp Chomp Food Centre to sell drinks.

Ms Lim bid for an open-category stall that had the option of selling cooked food, halal cooked food, Indian cuisine, drinks or cut-fruits. She received a Letter of Offer on Aug 21.

Meanwhile, the average successful tender bid for all cooked food stalls under NEA over the last three years is $1,514. The lowest bid was $5 and the highest $5,001, excluding an “outlier bid” of $10,000 in 2016 for a stall at People’s Park hawker centre. In the outlier case, the bidder also terminated his tenancy before he started operations.

Some Chomp Chomp stall owners told ST that Ms Lim’s business would not have been profitable if she went ahead with the tenancy agreement for a monthly rent of about $10,000.

Mr Toh Yien Song, 62, owner of Hai Wen Yuan BBQ, said: “Stores here are open only for a few hours at night, you’ll never be able to sustain a business if you pay that kind of rent.”

Chomp Chomp stalls open at around 4pm daily, but hawkers there said the crowds start turning up only between 6pm and 9pm on weekdays.

Mr Charlie Goh, 68, owner of Charlie Corner Health Fresh Juices, said: “Including operation costs, my monthly expenses are only up to $1,000. 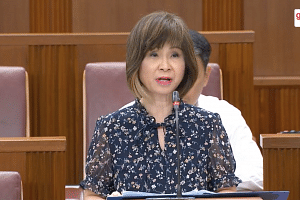 The $10,000 Chomp Chomp bid is significantly higher than the figures in many other hawker centres in the latest July bidding exercise.

The highest tendered bid for a cooked food stall in Golden Mile Food Centre was $2,029.

One of the lowest bids in the same bidding exercise was $49 a month for an Indian cuisine stall at Mei Chin Road.

Dr Amy Khor, then Senior Minister of State for the Environment and Water Resources, said in Parliament last year that the People's Park bid was an "exceptional case" and assured that hawker prices remain in check.

In a letter published by The Straits Times last year, NEA also addressed public concerns about high hawker bids driving up food prices. It cited a study on the possible drivers affecting hawker food prices, which showed that stall rentals form about only 12 per cent of total costs.

Dr Lee Bee Wah, who chairs the Government Parliamentary Committee for Environment and Water Resources, said isolated high bids such as those for the Chomp Chomp stall will not have an immediate effect on hawker food prices, especially if they are terminated immediately.

She said: "In hawker centres, most stalls have close competitors. The price charged by competitors has a huge effect on what a stall can charge."

For the Chomp Chomp stall, Ms Lim's bid was almost triple that of the second-highest tender bid of $3,504.68, which was submitted by Mr Lim Junjie, according to a document listing the successful tenderers in July posted on the NEA website.

But Mr Lim won the bid for another similar stall in Chomp Chomp that was up for tender, with a rent of $4,018.70. He will also be selling drinks at this unit.

The two bids were the highest among all the successful bids in July, beating the bids in other popular hangouts such as Maxwell Food Centre and Amoy Street Food Centre.

NEA said that, as Ms Lim had signed the tenancy agreement after receiving the Letter of Offer, she will not be debarred from participating in future tender exercises and will have her deposit returned.

"Stallholders who wish to terminate their tenancy agreement are required to give one month's notice, and pay their monthly rental and other operating charges. The successful tenderer in this case had given the requisite termination notice and also paid the first month's stall rental and operating charges," the agency said.

It added: "We encourage the tenderers to consider the overall overhead costs for their business when submitting their bids, and ensure that their business can be sustainable."

NEA said it lets out the vacant stalls in hawker centres under the Hawker Stall Tender Scheme in order to ensure transparency in the allocation of stalls.

The tender notices, provisional results and list of successful tender bids are made available online, in order to assist potential tenderers in deciding how much to bid.