Govt's accounts found to be in order, says minister, who cites 3 differences between the cases

It is wrong to compare the problems surfaced by auditors at the Workers' Party's (WP) town council to the lapses discovered by the Auditor-General's Office (AGO) at the People's Association (PA) and other public agencies, Trade and Industry Minister Chan Chun Sing told Parliament yesterday.

Mr Chan, who is PA's deputy chairman, said the Government's financial accounts were found to be in order, with public funds properly accounted for, unlike the accounts of Aljunied-Hougang Town Council (AHTC). Three MPs overseeing AHTC are facing a civil suit over $33.7 million in alleged improper payments.

The minister was responding to WP MP Png Eng Huat (Hougang), who asked about various lapses made by the PA in the AGO's report for financial year 2017/18.

"The issues surrounding AHTC are very different from the lapses found by AGO in government agencies," Mr Chan said.

One, AHTC's accounts have been found by its auditors to be unreliable since FY 2011/12.

"Your auditors repeatedly gave the town council a disclaimer of opinion as they were 'not able to obtain sufficient, appropriate audit evidence to provide a basis for an audit opinion'," he told Mr Png. When the AGO audited the town council in 2015, it concluded there was "no assurance that AHPETC's accounts are accurate and reliable or that public funds are properly spent, accounted for and managed", he said.

In contrast, the AGO has consistently given the Government an unmodified audit opinion on its financial statements. This means they are reliable, but does not mean there are no mistakes, he added.

We do not shirk our responsibilities or try to diminish the mistake by comparing with other people who have made other mistakes.

PA DEPUTY CHAIRMAN CHAN CHUN SING, stressing that the Government has proper rules to ensure checks and balances, including at the PA.

Two, a KPMG report on AHTC's accounts had said the "control failures" were pervasive and cut across key areas, including governance and financial control, over the course of five years.

"The Government does not face similar issues," Mr Chan said, noting "rules and procedures in place to ensure proper systems of checks and balances". He added: "The difference is this: Our rules are in place. When compliance is not in order, we take officers to task and we can improve and tighten up the system."

Three, government agencies responded to lapses uncovered by the AGO by taking firm action against the individuals responsible.

Some did so when problems were surfaced in internal audits. Where criminal offence is suspected, agencies promptly escalate cases, he added, citing how, following the AGO flagging possible procurement wrongdoings at the National Library Board in 2014, the case was referred to the police and a former officer was charged with corruption.

There are other such cases, he added. "We don't hide them. We don't sweep them under the carpet. We face them squarely and we take the actions necessary," he said.

Mr Chan reiterated that the lawsuit against the WP MPs was not brought by the Government but by an independent panel.

He stressed the Government has proper rules to ensure checks and balances, including at the PA. "The fact that we run a large system with many volunteers does not excuse us from making mistakes. But when we make mistakes, we find out, we tighten the process, we improve," he said. "The public can have every confidence that this government takes its responsibility seriously, transparently." 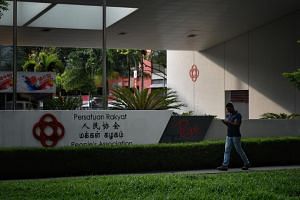 Police investigating claims made by ex-PA officer for overseas buys

Mr Png had also asked why the PA had six consecutive years in which its accounts received an "adverse opinion" and many years of qualified accounts before 2007.

Mr Chan disputed this, and repeatedly stressed the difference between qualified and unqualified accounts. While both may have mistakes, an unqualified statement is one that people can trust, he said.

"PA has made mistakes, we accept, we acknowledge and we will rectify and put it right," he added. "But at no time was it ever suggested that the set of accounts cannot be trusted."

Mr Chan later clarified that the PA's accounts for grassroots organisations were not consolidated before FY 2012/13, which is why the auditor had said it did not "fully comply with the standards".

"We have since taken steps to consolidate all 1,800 grassroots accounts into PA's financial statements to be in full compliance with the auditing standards, and PA has received an unqualified audit opinion since 2013," he said.