SINGAPORE - Workers' Party chief Pritam Singh addressed criticisms that a parliamentary committee tasked to study the issue of fake news singled out historian Thum Ping Tjin, saying that Dr Thum, too, had done the same with the People's Action Party (PAP) in his representation.

"As much as I agree PJ was singled out, he also singled out the PAP for special treatment in his representation," he wrote on Facebook on Saturday (Sept 22) in response to a comment by freelance journalist Kirsten Han.

"There was no way they were going to let that stand on the parliamentary record, unrebutted. Singling out the PAP was PJ's prerogative, consequences included."

Dr Thum had written in his submission to the Select Committee on Deliberate Online Falsehoods earlier this year that "'fake news' has not, historically, had much of an impact in Singapore - with one major exception: the People's Action Party government has, historically, spread 'fake news' for narrow party-political gain".

He said in his submission that in Operation Coldstore in 1963, the PAP government lied about radical communist conspiracies to detain its political opponents.

In public hearings in March, Law Minister K Shanmugam, who was also on the Select Committee, questioned Dr Thum for close to six hours on his research.

Last week, the committee, of which Mr Singh is a member, issued a report outlining the threat of fake news and recommending ways that Singapore could deal with the problem. 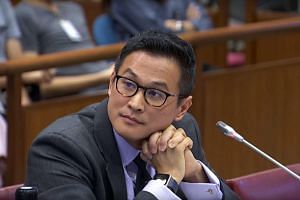 It also included an addendum which, among other things, accused Dr Thum of lying about his academic credentials.

Last Friday (Sept 21) , Mr Singh wrote about the report on his Facebook, highlighting his view that Singapore should target only falsehoods distributed to undermine a society, and that any measures should not reasonably be expected to stifle a frank and healthy exchange of opinion required for a functioning democracy.

His post attracted comments from various Facebook users, some of whom asked him to elaborate on his views about the Select Committee's dealings with Dr Thum.

In response to Facebook user Bertrand Seah, Mr Singh said: "I have views on how the Select Committee could have dealt with the oral testimony differently. But there are eight other elected MPs who have their own views, too."

Ms Han, who wrote that she and other civil society activists were "taken aback and disappointed by WP's complicity in a smear campaign against a historian", said in a comment that she had "expected the WP to show more backbone in taking a stance against bullying".

Mr Singh replied: "I can't get into the Select Committee's processes etc, so I can't say anything more about the PJ imbroglio then I already have.

"But I will say that this episode may not be the best one to use as a barometer for the WP's stance against bullying, but I can respect that you have a different view about it and why you feel so strongly about it."

Mr Singh also engaged commenters on the committee's broader report and recommendations, which include introducing new laws to give the Government powers to stop the spread of fake news and impose criminal sanctions on those who deliberately start and disseminate fake news that lead to serious harm.

A few commenters raised the concern that such new laws would stifle free speech, with Mr Seah saying: "It's extraordinarily naive if our leader of opposition thinks new legislations won't significantly enhance the government's considerable coercive and agenda-setting powers."

Mr Singh responded: "Any new legislation will be an exercise in redefining norms. But the extent to which technology and particularly social media has weaponised information and even compromised democratic institutions cannot be ignored, whether you support the opposition or not. The real point you make is about the extent of those legislative powers and how they ought to be checked or circumscribed. That's a point I do not disagree with."

To another commenter who questioned the need for new laws, Mr Singh said: "I spoke for more Select Committees to be set up when Parliament opened in 2016. The Select Committee's recommendations still have to be debated in Parliament. There is no law proposed as yet."

He added: "From the written opinions of many representors, you will find other Singaporeans sharing different views. In the Select Committee, the challenge for me as an opposition politician of the WP is to accommodate and find a balance between many legitimate views."