SINGAPORE - Workers' Party chief Pritam Singh wasn't a straight-A student. For years, he struggled to cross each successive hurdle in the education system.

"I fumbled badly at the Primary School Leaving Examination, entering the Normal stream in secondary school, and really bumbled my way into junior college and university," he said at a commencement speech at the National University of Singapore (NUS) on Thursday (July 19).

Returning to his alma mater to speak to 470 new graduates of the Faculty of Arts and Social Sciences - the faculty he graduated from in 2000, he recalled that enrolling in the faculty felt to him like he had "hit the lottery".

But his experience at NUS and at national service proved a turning point in his attitude towards education, he said, citing his positive military experience and exposure to political science and history subjects.

He eventually won the Straits Steamship Prize in 1999, awarded to the top history and political science undergraduate of each cohort.

Mr Singh cited his own bittersweet educational journey to encourage his young audience - especially those who, like him, had not always done well academically.

"There may be some of you who felt like I did throughout the course of my educational journey before NUS, that feeling of 'I should have studied harder'," said the Aljunied GRC MP.

Compared to their better performing peers - such as those who earned degrees with higher distinctions - they may find it harder to secure their dream first job, he added.

"But make no mistake about it, when you are through that door, all bets are off. I hear this more and more at all workplaces - a degree is only as good as your work ethic, attitude and diligence," he said. 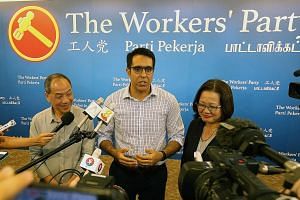 What will Workers' Party be like in a post-Low Thia Khiang era?

He also counselled the better performers not to passively let their degrees speak for themselves, but to continue the relentless drive towards excellence.

"And as you climb the ladder of success, be nice to people along the way. Because you may meet the same people on the way down," said Mr Singh, to warm applause.

The opposition MP was invited by the NUS Department of Political Science to address the latest batch of graduates in political science, psychology and global studies - a rare appearance for an opposition politician at a university commencement ceremony.

Thursday's ceremony was the penultimate one at NUS for the year. Other guest speakers at the 23 ceremonies this year include Senior Minister of State for Health and Environment and Water Resources Amy Khor and People's Action Party MP Chia Shi-Lu.

Valedictorian Walid Jumblatt Abdullah, 32, said in his speech on Thursday that Mr Singh's invitation to speak at this year's ceremony was itself significant.

"I believe this is a positive sign that shows the continuous development of our democracy," said the political science doctoral graduate.