SINGAPORE - When the late Minister Mentor Lee Kuan Yew and then-Senior Minister Goh Chok Tong stepped down from the Cabinet in 2011, they reminded their successors that "the younger team must always have in mind the interests of the older generation", who have to be well-looked after, said Deputy Prime Minister Heng Swee Keat on Sunday (Oct 13).

Mr Heng, a "rookie MP" at the time who entered politics in the same year, said these words have stayed with him and continue to guide him in his work.

He was speaking at an event by the People's Action Party Seniors Group (PAP.SG), which champions elderly causes, to mark the International Day of Older Persons.

The comments by Mr Heng, who is also second-in-command in the PAP as its first assistant secretary-general, come at a time when more than 500,000 Singaporeans, or about 15 per cent of the population, are aged above 65.

Noting that the Government wants to be able to support seniors in their diverse aspirations, Mr Heng said leaders will continue to listen to a range of views and adjust policies to meet older people's needs.

In particular, he and his colleagues pay close attention to the work of PAP.SG, which was formed in 2013.

Many suggestions in a position paper that the group submitted in January, after more than six months of consultation, have become government policy, he said. 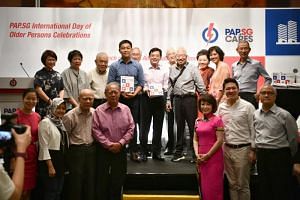 Ageing should be talked about positively and not as a problem: Tan Chuan-Jin

Singapore can learn from Japan how to cater to elderly at home, in workplace as society ages: PM Lee Hsien Loong

Silver, the new gold: Longer lives offer opportunities to tap, instead of problems to solve

For instance, the idea to raise Central Provident Fund contribution rates for older workers beyond 55 was an announcement at the National Day Rally this year.

The feedback the group collects will go far in helping Singapore's fourth generation leaders develop and explain policies better as well, he said.

He encouraged the group to continue staying close to the ground.

A handbook launched on Sunday at the event, which was attended by around 420 guests including retired MPs at Hotel Miramar Singapore, will be a resource for PAP activists to explain relevant social schemes to seniors.

"This approach of working with and staying close to the ground must continue to be passed down through generations of PAP activists," said Mr Heng.

He added: "The Government will do its part to make sure that our seniors can have peace of mind in their golden years... and receive the care they need. The seniors group can play a part by continuing to engage seniors deeply, and champion their causes."