On Sunday (Nov 19), the People's Action Party (PAP) will hold its biennial convention.

Prime Minister Lee Hsien Loong will address thousands of party members at the end of what has been a relatively choppy year for the ruling party, which has governed Singapore since 1959.

Mr Lee, who is the party's secretary-general, is expected to rally his troops to stride confidently into 2018, an important year for the party and for Singapore, as a major Cabinet reshuffle is likely to shed further light on the question that preoccupies the mind of every political observer: Who from the fourth generation of PAP leaders will emerge as the next prime minister?

Observers say there are only three men left in the race: Finance Minister Heng Swee Keat, Minister in the Prime Minister's Office Chan Chun Sing and Minister for Education (Higher Education and Skills) Ong Ye Kung. Nothing as yet separates them decisively.

Since the party's conference in December last year - the last big PAP get-together - it has had to grapple with three situations, which, each on its own, would have been a heavy enough burden for one year. These are the Oxley saga, the public debate over the presidential election and the MRT troubles.

The most settled among the three issues appears to be the presidential election. Significant unhappiness erupted online in the final week leading to Nomination Day in September, which saw Madam Halimah Yacob, a former PAP MP and Speaker of Parliament, elected unopposed as Singapore's first woman president, and first Malay president in 47 years.

Chatter on the Net that there is an extremely steep political price to pay by the ruling party is probably overstated.

One reason is that there are arguably few bread-and-butter issues at stake in the presidential election, important though it may be.

Another - and more crucial point - is that the genuine warmth and likeability of President Halimah have great potential, in the course of her six-year term, to override concerns that the election was a walkover.

Some people have a knack for connecting with others and they are the ones who most naturally excel at people-to-people politics, which counts for a great deal.

President Halimah is one such person.

That said, there will be lingering unhappiness on this issue for some time.

The Oxley saga is not settled but in abeyance, to use PM Lee's words. It was a crisis that hit the Prime Minister at a very personal level, and lesser men confronted with such a crisis would have buckled. 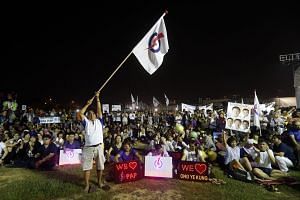 How long can PAP sustain its 'holy order' system of politics?

First, he had the political skill to overcome his situation of adversity. It was not clear as crystal what would be the wisest way to handle it when the story broke in June.

There were many options, each opening up a new branch of imponderables. Time, however, has shown that he seemed to have picked the path of least damage and kept an unhappy situation under control. Even his most bitter rivals would admit that it speaks of sound judgment.

Second, the saga ultimately came down to whether or not Mr Lee had the trust of the people. The allegations were very serious, if unproven. (In fact, the responsible and correct thing for anyone with material information of such allegations to do was to make a police report, so that the allegations could be proven one way or the other. Alas, they were not.)

Though Mr Lee answered questions over two days in Parliament, he knew the final verdict lay in the court of public opinion, and this verdict hinged on the level of trust people had in him.

It appears that for many people, the allegations have not stuck. They did a gut check, and while they may not have liked every detail of what they heard, the years of seeing him lead the nation and knowing him as a leader were enough to give him the benefit of the doubt.

The MRT troubles are probably the most difficult of the three.

Unlike the presidential election, it is a bread-and-butter issue. And unlike the Oxley saga, it has very little to do with trust but everything to do with what people are actually experiencing.

With one unprecedented incident (an MRT tunnel flooding) followed less than six weeks later by another (a train collision), even the most ardent supporter would, at the very least, be driven to a temporary suspension of belief.

Given that they happened so close to Sunday's convention, transport woes will probably get at least a mention in Mr Lee's speech. What he says will be closely watched.

The three difficulties of the past year have, to some extent, masked a year of otherwise fairly positive news for the ruling party, proving the Chinese saying: Good news doesn't leave the house, while bad news travels a thousand miles.

The economy, for one thing, is beginning to look optimistic, despite the continuing global uncertainties.

The forecast for the third quarter put year-on-year gross domestic product growth at 4.6 per cent, the highest in 14 quarters. The full-year growth figure is likely to exceed the official forecast of 2 to 3 per cent.

Unemployment rates have also declined significantly in the third quarter against the second quarter.

Second, Singapore's relations with the major powers have returned to an even keel. The crisis over the detained Terrex vehicles in Hong Kong was resolved early this year, and high-level exchanges with China since suggest that Singapore and China are shepherding the relationship in a positive direction.

Party activists say the past year has also been marked by much deeper ground engagement by the party's leaders and MPs. More frequent meetings have been held, than last year, with party branches and people outside the party to explain the presidential election and other issues, including transport.

But as PM Lee approaches the half-time whistle for the parliamentary term, his speech will be scrutinised intently for any further information on the party's leadership renewal.

Two years ago, Mr Lee had said at the party's convention that the new team will "gel and take over the reins, well before the election after next". If he had meant some time in the middle of the next term, Mr Lee has roughly one term (or two half-terms) left as prime minister.

If he hands over shortly after the next election - which would make sense as it would give the next leader a longer lead time to build up his standing before going to the polls - then Mr Lee has less than one term to go.

So, on Sunday, they will be watching for any sign, although they are not likely to get a clear one until next year.

Mr Lee has, in a sense, begun his last lap. The next general election will be his last battle as general.

There is ground chatter in the party that 2019 may not be a bad year to have this last battle. It coincides with the 60th anniversary of self-government - a significant milestone in Singapore's journey towards nationhood - as well as the 60th anniversary of the PAP in government - a good time to remind people how far the country has progressed under many pairs of steady PAP hands.

Whether it is ultimately 2019 or 2020, it may be time for the troops to enter a state of higher alert and prepare for the pace of groundwork to be redoubled.

It will not be lost on the soldiers that the other side in the battle - the Workers' Party - is switching its general before the battle, with its secretary-general, Mr Low Thia Khiang, announcing that he will step down next year, before the general election.

This may seem like a one-up for the PAP, as it will be fighting a newer general with a lower standing. But Mr Lee and other PAP leaders will want to stress that there is no room for complacency.

Should the party conference a year from now be the full mobilisation of battle-ready troops, observers may see Sunday as the start of the call to shine the armour and sharpen the sword.