When Parliament yesterday passed a Bill that gives unmarried mothers 16 weeks of paid maternity leave - equal to what married mothers receive - it marked a significant shift in government policy.

The debate on the Child Development Co-Savings (Amendment No. 2) Bill was also marked by another notable shift - in tone.

In previous parliamentary debates on the issue of unwed mothers, office-holders - and sometimes even MPs - often struck a judgmental or cautionary note.

In contrast, the mood yesterday was one of warmth and inclusivity, even as Minister for Social and Family Development Tan Chuan-Jin noted that the Government ultimately encourages parenthood within marriage.

This has been the Government's consistent stance. But it used to be expressed much more harshly. 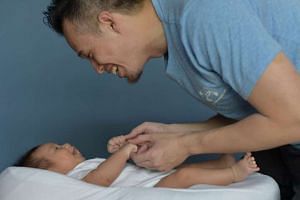 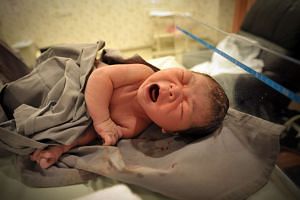 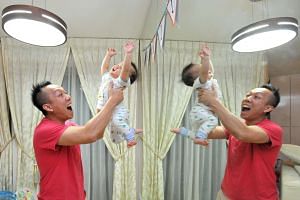 Just over a decade ago, in 2004, then-Acting Minister for Community Development, Youth and Sports Vivian Balakrishnan spoke of how the state should not step in when fathers are absent and there is a "breakdown in the sense of responsibility".

In previous parliamentary debates on the issue of unwed mothers, office-holders - and sometimes even MPs - often struck a judgmental or cautionary note.

In contrast, the mood in the House yesterday was one of warmth and inclusivity, even as Minister for Social and Family Development Tan Chuan-Jin noted that the Government ultimately encourages parenthood within marriage.

"We recognise that there are needs and we will do our best to help them, but (unwed mothers) cannot be pegged at the same level as women who are married, or who were previously married and are now divorced, or are widowed through no fault of their own," he said.

A year later, replying to then- Non-Constituency MP Steve Chia, Prime Minister Lee Hsien Loong said the Government should not "be encouraging women to make single parenthood a lifestyle choice".

Just last year, then-Minister for Social and Family Development Chan Chun Sing framed the question as one of competing objectives: supporting single unwed mothers versus supporting parenthood in the context of marriage. His emphasis on how "the child is innocent" evoked - whether intentionally or not - the rhetoric of bad behaviour.

In 2011, Dr Lam Pin Min, then an MP for Ang Mo Kio GRC, first noted how the Government did not want to encourage "the growth of 'undesired' alternative households and the erosion of Asian values" before launching into a plea to help single parents who face pressure and "discriminatory government policies".

In contrast, both Minister Tan and MPs yesterday framed the issue in more compassionate ways.

There was no rhetoric of crime and punishment, or of the dangers of encouraging single parenthood.

In his opening speech, Mr Tan ran through the changes - announced in this year's Budget debate - in simple, non-judgmental language.

In the ensuing debate, MPs did not frame such support as a last-resort measure to save an "innocent" child from parental sins. Instead, they spoke about equality and inclusiveness.

Mr Seah Kian Peng (Marine Parade GRC) appealed for compassion not just for the child, but for the single mother as well: "Imagine the stress of a pregnant, unwed mother having to deal with basic housing issues on her own, in an undignified manner, and not able to feel a sense of security nor provide a secure environment to her child once he or she is born."

Mr Louis Ng (Nee Soon GRC) framed it in terms of levelling the playing field for unwed parents and mentioned "the struggles they face and the risks they are exposed to".

And all four called for more to be done to help single parents, from making them eligible for the Baby Bonus cash payout, to letting them form a family nucleus with their child to buy subsidised HDB flats.

Mr Tan rejected the suggestions. But he did so in a gentler tone than his predecessors. "I think it is... important to understand that we continue to believe in the importance of the family institution. We encourage married couples to have children," he said.

This is why measures like the Baby Bonus are targeted at married parents, he added. "However, as mentioned earlier, for unwed parents, there are also various ways in which we can support them."

He did not pit the well-being of unwed mothers against the Government's priority of parenthood within marriage, nor imply a fundamental inequality between married and unmarried parents.

Such a reply may not satisfy those who want more to be done. Still, it is a step forward.

As Singapore strives to be a more inclusive society, such advances in both policy and rhetoric are to be welcomed.

A version of this article appeared in the print edition of The Straits Times on November 11, 2016, with the headline 'Welcome shift in tone as unwed mums are treated with empathy'. Subscribe
Topics:
More
Whatsapp Linkedin FB Messenger Telegram Reddit WeChat Pinterest Print Purchase Article Copy permalink