SINGAPORE - The voter rolls have been updated and Singaporeans will be able to check their particulars in them from Tuesday (Feb 26), said the Elections Department in a statement on Monday.

Those who want to check their eligibility to vote can do so online at the Elections Department website.

They can also check their particulars in person at community centres and clubs or at the Elections Department office in 11 Prinsep Link.

Singaporeans who are overseas can also check the voter rolls at Singapore overseas missions that serve as registration centres.

Those inspecting the voter rolls in person must bring their NRIC or passport with them.

The registers of electors will be open for public inspection until March 11.

During the inspection period, Singaporeans can submit a claim to be included in the register if their names have been omitted or to update their particulars. 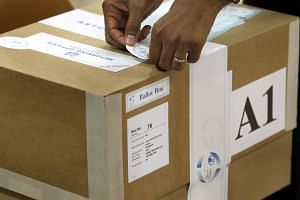 Counting machines to be used in next election

They can also submit an objection to have their names removed from the register.

These claims and objections can be submitted on the Elections Department's website using SingPass or in person.

People who have had their names removed from the registers for failing to vote in a past election can apply to have their names restored, so that they can vote in future elections.

The Elections Department encourages people to make such applications early.

The Parliamentary Elections Act requires the registers to be revised no later than three years after every general election.

It also provides for the Prime Minister to call for revisions from time to time.

The last general election took place in September 2015, while the next must be held by April 2021.

The registers of electors were last updated in June 2017, in preparation for the presidential election in September that year.