SINGAPORE - The United States remains committed to Asean centrality under America's Indo-Pacific strategy, and looks forward to broadening and deepening its strategic partnership with the region, Secretary of State Mike Pompeo said in his first meeting with his Asean counterparts on Friday (Aug 3).

He noted that President Donald Trump attended Asean-led summits in Manila last November and Vice-President Mike Pence had also travelled to the region.

"I expect and am eager for this frequent engagement to continue," Mr Pompeo said.

"Our economic engagement has created hundreds of thousands of jobs on both sides of the Pacific. Asean is the No. 1 destination for US investment in Asia and Asean member states have increased their investment into the US by over 1,300 per cent between 2004 and 2016."

Speaking at the start of the Asean-US ministerial meeting, Mr Pompeo underlined his country’s continued commitment to Asean, citing the US$113 million (S$154 million) initiative he had announced earlier this week to help fund energy, infrastructure and digital economy projects in the region.

"On security, we appreciate Asean's ongoing efforts to promote peace and stability in the region, support the rule of law in the South China Sea, and to strictly enforce sanctions on North Korea," he added.

The Asean-US meeting is one of a series of annual meetings that Asean foreign ministers are holding with their counterparts from the grouping's key partners to take stock of ties and discuss how they can be expanded.

But this year's meetings take place amid trade tensions and geopolitical uncertainty.

Asean members have also been lukewarm to the notion of an Indo-Pacific strategy, as they are wary of being drawn into great power competition and want to be sure that Asean remains central - in the driver's seat - when it comes to decisions affecting the region.

In their joint communique on Thursday (Aug 2), foreign ministers reaffirmed the need to strengthen an Asean-centric regional architecture "that is open, transparent, inclusive and rules-based".

They reiterated this position on Friday. 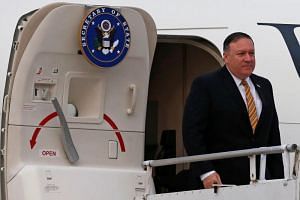 US tariffs on Chinese goods will hurt its own consumers and businesses: China Foreign Minister Wang Yi

Asean's key partners also sought to address members' concerns at meetings, as they underlined their commitment to Asean centrality.

Foreign Minister Julie Bishop of Australia, which, together with the US, Japan and India, forms the so-called quad of countries championing greater security cooperation as part of an Indo-Pacific strategy, told the Asean-Australia ministerial meeting: "Asean sits at the heart of the Indo-Pacific. It convenes the region's key forums... and has a unique capacity for collective action."

She added: "Its centrality to the region's architecture is uncontested."

Said Indian Minister of State for External Affairs V.K. Singh at the Asean-India ministerial meeting: "We see Asean as the fulcrum of peace, prosperity and stability in the region. We remain committed to promoting Asean's primacy in the regional architecture."

Speaking before Mr Pompeo, Malaysia's Foreign Minister Saifuddin Abdullah, who co-chaired the Asean-US meeting with him, said the US is an important and strategic partner for Asean, with solid relations encompassing wide areas of cooperation.

Datuk Saifuddin said he looked forward to working closely with the US to take this relationship to a higher trajectory.

"Malaysia, like all Asean member states, appreciates the US role in maintaining peace, stability and prosperity in the region. We also appreciate the US' constructive role in evolving a rules-based regional architecture," he added.

Earlier in the day, Mr Pompeo was in Putrajaya, where he called on Malaysian Prime Minister Mahathir Mohamad.

"A range of issues such as bilateral relations, regional and international matters were discussed," Tun Dr Mahathir said on Twitter.

He will attend the East Asia Summit ministerial meeting and the Asean Regional Forum on Saturday before travelling to Jakarta, where he will call on Indonesian President Joko Widodo on Sunday.