SINGAPORE - The labour market showed slight signs of slowing down in the second quarter of the year, after a sustained improvement since June last year, preliminary estimates released on Friday (July 27) by the Ministry of Manpower (MOM) showed.

Unemployment figures edged up, even as total employment grew - a result of more people being lured by a recovering economy to enter the labour force and look for work. Retrenchments also inched up.

Overall, the seasonally adjusted unemployment rate went up to 2.1 per cent, from 2 per cent in the last quarter from January to March.

For Singaporeans, the rate went up to 3.1 per cent, from 3 per cent.

More people also lost their jobs in the same period, compared with the three months before.

After hitting a five-year low of 2,320 layoffs between January and March, retrenchments went up to 2,500 in the second quarter. The figure was 3,640 a year ago. 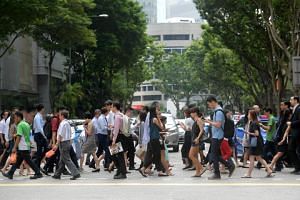 Total employment, excluding foreign domestic workers, expanded by 7,100 - a larger increase than the growth of 400 recorded in the first quarter. This was due to improvements in the employment situation of the construction and manufacturing sectors, said MOM.

In a Facebook post, labour MP and National Trades Union Congress assistant secretary-general Patrick Tay said retrenchment figures are expected to inch up in the next quarter due to disruption and reorganisation of businesses, and amid uncertainties caused by trade sanctions imposed by the United States.

Structural challenges such as skill and job mismatches continue to be one of the main causes of unemployment in Singapore, Mr Tay added, stressing the need for workers and employers to remain agile and adaptable.