BRUSSELS - The free trade deal between Singapore and the European Union, which is pending ratification, is a "pathfinder" deal that could pave the way for similar pacts between the EU and other Asian nations, Trade and Industry Minister Chan Chun Sing said on Wednesday (July 11).

Speaking to the media after a day of meetings with EU trade officials in Brussels to discuss the EU-Singapore Free Trade Agreement (EUSFTA), Mr Chan said his visit to the EU capital comes at a critical juncture also because of rising protectionism around the world.

Markets have been rattled as a trade spat between the United States and China threatened to escalate into an all-out trade war, and Singapore's leaders have warned of the serious impact on the country if the conflict sparks a sustained plunge in business sentiment and consumer confidence, or a tightening of global liquidity.

On Wednesday, Beijing warned it would take counter-measures against a US move to slap new tariffs on US$200 billion (S$272 billion) of Chinese goods.

This comes after the US formally imposed tariffs on US$34 billion worth of Chinese goods last week, with China responding with matching tariffs.

"In the current global climate of protectionism and unilateralism, it is in our common interest to send a strong and powerful statement to the rest of the world that we have like-minded partners that continue to believe in a free, open and rule-based multilateral system," said Mr Chan.

"In the larger context it's not just about a bilateral agreement between the EU and Singapore but there are quite a few larger strategic reasons for the EUSFTA to be ratified." 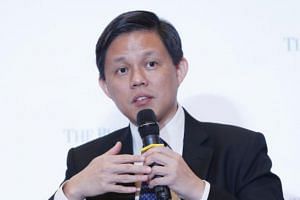 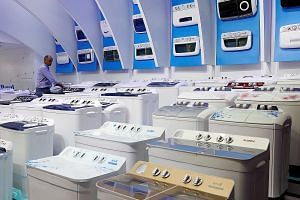 The EU was Singapore's third-largest trading partner last year, with trade between both sides reaching S$98.4 billion, slightly more than 10 per cent of Singapore's total trade.

Mr Chan said given the global developments, it is also important for the EU to continue entrenching its position in South-east Asia's economic development.

"However if this does not come about then many South-east Asian and Asian countries might lose confidence and question the commitment of the EU to remain in this part of the region."

And so this is an important juncture, he added, "to convince the European Council members, commissioners and all the members of the European Parliament that this is a critical and important free trade agreement".

Among the officials Mr Chan met on Wednesday were Austrian Federal Minister for Digital and Economic Affairs Margarete Schramböck, who is also the chair of the Foreign Affairs Council (Trade), comprising the trade ministers from all 28 EU member states.

Mr Chan said the meetings went well, with the EU officials recognising that it is in their interest to remain engaged with Asia and conclude the FTA speedily before they are bogged down by domestic priorities.

Mr Chan, who is accompanied on this trip by officials from the Trade and Industry Ministry, leaves for Paris on Thursday.