The practice of town councils delegating to their managing agents the selection of consultants for projects - from a pre-approved panel of companies - was debated in the High Court yesterday, the 15th day of a civil suit involving three Workers' Party (WP) MPs.

Senior Counsel Davinder Singh said that while the Aljunied Town Council had this practice and the WP did likewise when it took over operations from the ruling People's Action Party, "two wrongs don't make a right". Town councillors cannot "absolve" or "side-step" their responsibilities, he said while cross-examining WP chief Pritam Singh, one of the eight defendants in the lawsuit.

Such a practice of delegation to the managing agent does not follow the rationale and spirit of the Town Councils Financial Rules, the Senior Counsel added.

But the WP chief said that a properly appointed managing agent would be in the best position to decide which consultant would be better for the job. Mr Pritam Singh added that the consultants had been appointed by the town council, and had been reviewed to undertake a particular scope of work.

Mr Davinder Singh was questioning Mr Pritam Singh on the Aljunied-Hougang Town Council's (AHTC) use of an appointed panel of architect consultants, which it delegated its managing agent FM Solutions & Services to select from for construction projects.

Only two consultants, LST Architects and Design Metabolists, tendered to be on the panel in 2012, and both were selected by AHTC's tender and contracts committee.

AHTC, which had been directed by an independent panel to sue eight defendants for alleged improper payments, has claimed the town councillors failed to justify selecting the higher priced consultant, LST, in seven out of 10 projects. 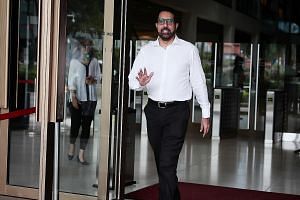 WP 'loud and clear' in telling other firms to stay away, says Davinder

Town councillor explains why he did not query FMSS appointment

Mr Davinder Singh said the town councillors should make the final decision on which consultant to use. But the WP chief said this will be "fait accompli" to some extent, as the managing agent would have conducted the evaluation process before putting it to the councillors.

Mr Pritam Singh noted the Town Councils Financial Rules provides the flexibility for the town council to delegate the duty to the managing agent. In fact, it was doing this on the basis of precedence set by those who ran Aljunied Town Council previously, he added.

Still, Mr Davinder Singh said the principle must be that if the law imposes a duty on the town councillors, they must apply their minds to choose which firm is the best, before work or services are rendered.

Mr Pritam Singh agreed the councillors are "ultimately responsible", and it is important for AHTC to establish whether they are "correct or misguided" in delegating the duties to the managing agent.

Yesterday, Mr Davinder Singh also asked Mr Pritam Singh why the contract for a conservancy and cleaning provider for the Punggol East constituency, Titan Facilities Management, was not extended.

When a fresh tender was called, the same firm was re-appointed at higher rates. This occurred when Punggol East was under the WP's purview between 2013 and 2015.

The WP chief said the then Aljunied-Hougang-Punggol East Town Council's (AHPETC) contracts manager had wrongly told the councillors there was no option to extend.

Asked whether he had checked AHPETC's contractual position, Mr Pritam Singh said he did not.