SINGAPORE - India's decision to strike down a law banning gay sex has reignited a debate on the issue here, especially after a prominent figure voiced his support for Singapore to move in the same direction.

In a Facebook comment on Thursday (Sept 6) that has since been shared widely, former ambassador Tommy Koh wrote: “I would encourage our gay community to bring a class action to challenge the constitutionality of Section 377A”.

377A is the law that criminalises consensual sex between adult men, but is not actively enforced.

Prof Koh made the comment in a Facebook post of Mr Simon Chesterman, dean of the National University of Singapore Faculty of Law, who had shared an article.

In the post, Prof Chesterman congratulated a former classmate and others who had helped move the needle on the legal issue in India, culminating in Thursday's landmark ruling.

When another Facebook user pointed out to Prof Koh that there had been a failed attempt in Singapore in 2014 to challenge the constitutionality of 377A, he simply replied: "Try again." 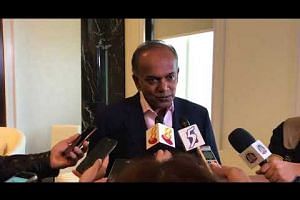 PM Lee: Why Singapore must 'leave Section 377A alone'

Prof Koh also liked a Facebook post on Friday by Mr Janadas Devan, the chief of Singapore government communications, in which he wrote: "Speaking personally, I support Tommy's position. 377A is a bad law; it is bad law. Sooner or later, it will go. Pray sooner rather than later."

Members of the lesbian, gay, bisexual and transgender (LGBT) community cheered the note of support from Prof Koh.

Organisers of the annual Pink Dot rally quoted him on their Facebook page, with the hashtag #tryagain and added: "Time to get rid of the archaic law left behind by the British!"

Mr Leow Yangfa, the executive director of Oogachaga, a non-profit organisation working with the LGBT community, told The Straits Times on Friday: "We would like to thank Prof Tommy Koh for the very generous word of encouragement for us to persevere in our efforts to seek equality and justice for everyone, regardless of our sexual orientation and/or gender identity."

Although not proactively enforced, the continued existence of section 377A in Singapore's penal code creates an environment where it is acceptable to treat members of the LGBT community in an unequal way, he said.

For example, he noted, there is a lack of protection for LGBT employees who may be fired on the basis of their sexual orientation or gender identity, and transgender individuals often face difficulty in accessing appropriate healthcare and social services.

But on the other side of the issue, conservative leaders have begun to fret, not just about the implications of India's historic move but Prof Koh's Facebook comment, too.

Pastor Lawrence Khong, chairman of LoveSingapore, a network of more than 100 churches here, told The Straits Times on Friday: "I'm somewhat concerned, perhaps even disappointed, that a public and some would consider a government figure is making a statement like that. It does not come across as being helpful to building cohesion in society."

Pastor Khong urged the Government to take a cautious approach on the issue.

The organisation has previously asked Muslims not to attend any event that "supports transgression" of Islamic teaching on the family, including events in support of the LGBT community.

Lawyer Lim Biow Chuan, who is Deputy Speaker of Parliament, said the Government has been taking a cautious stance on the issue for many years.

The Singapore Government has stated on record that to "accommodate the sensitivities of different communities so that there is room for all to exist harmoniously together", 377A is not proactively enforced, and all citizens, regardless of their sexual orientation, are free to lead their lives and pursue their activities in their private space without fear or violence or personal insecurity.

Mr Lim told The Straits Times: "It's still a very divisive issue in Singapore. If you look at our society today, we can't raise the topic without everyone getting riled up."

He added: "I'm not convinced that (reviewing 377A) would be the right move at this point in time - it would just divide society. But maybe in the future, as people's values develop and change, we may find a better time to do so."