But by 1991 - a year after Singapore's founding Prime Minister Lee Kuan Yew stepped down from his role - the strong foundations had been laid for a better future. Indeed, that year fourth president Wee Kim Wee declared: "We can plan ahead for the next 25 years, and marshal the resources needed to turn bold ideas into reality."

And now, the presence of "nice-to-have" concepts in the President's Address in recent years shows how today's affluent Singapore can look beyond basic needs and aspire towards becoming an inclusive, global city. 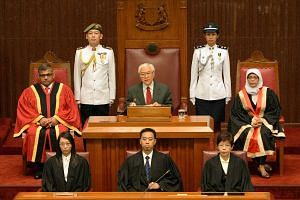 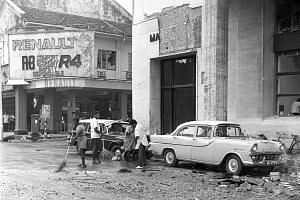 Early years (1965-1980): Laying the foundations for shift from Third World to First 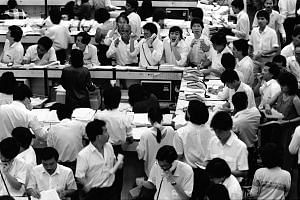 Growth years (1981-1990): A recession, political changes and drive for excellence

The Government has focused on building a first-class home: a gleaming new skyline greets visitors at Marina Bay, old housing estates are being rejuvenated, while steps are being taken for Singapore to become a tech-savvy Smart Nation.

Infrastructure aside, also in the equation are steps to help those left behind such as the Workfare Income Supplement for lower-wage workers and the Silver Support Scheme for poor elderly people.

There are also more skill upgrading programmes for workers, and increased pathways for children to be educated.

But there have been rough patches, too. Through health crises, such as Sars in 2003, and the lingering terror threat, Singapore has shown resilience. Sixth president S R Na-than captured this when he addressed Parliament in 1999: "What really makes Singapore tick, and makes all the other hardware and software work, is our 'heartware'. This is the master software that gives us that inner strength and common purpose to build a better Singapore and rally together when faced with adversity."

The terrorism threat makes it even more critical to reinforce the nation's lifeblood of racial and religious harmony, Mr Nathan said in 2002, as he explained why Inter-Racial Confidence Circles and Harmony Circles were formed in the aftermath of the 9/11 terror attacks.

Given the heightened religious consciousness, these constituency-level groups, which oversee relations among ethnic communities, can help Singapore "move beyond mere tolerance, in order to enhance appreciation and build confidence amongst the different groups".

Mr Nathan also pointed out that Singapore had a stake in global affairs, not just in counter-terrorism, but also in the environment, epidemic control and free trade.

Although Singapore had been enjoying double-digit growth, the opposition tapped into simmering anxieties about housing and cost of living in the lead-up to the 2011 polls, resulting in the ruling People's Action Party's worst electoral performance since independence. It won 60.1 per cent of the popular vote and lost one group representation constituency for the first time.

Singapore's seventh President, Dr Tony Tan Keng Yam, alluded to that in his address in 2011: "More voices want to be heard; more people are contending to represent different groups and interests ... But in the heat of the political tussle, we must not forget that we all share the same goal, namely serving the people."

Mr Ong Teng Cheong - Singapore's fifth president and first elected president - stressed in 1994 the importance of developing trade and investment links with neighbouring countries so as to tap the vitality of a fast-growing Asean. He said the Government would promote a regional outlook and remove obstacles that might block entrepreneurs and companies going offshore.

Even so, the economy had to be upgraded to avoid losing business to other countries with lower costs and more abundant resources, he added, as a backdrop to the Goods and Services Tax that came into effect on April 1, 1994.

It was also crucial to identify new growth areas, said the next president, Mr Nathan, in his 2002 address, which was when Singapore started liberalising the services industry, notably the telecommunications and financial sectors.

While strengthening existing industries in electronics, petrochemicals, pharmaceuticals and engineering, Singapore should "exploit promising technologies" in biotechnology, new materials, photonics and nanotechnology to develop new growth areas, he went on to add in 2005.

Investing in research and development, Mr Nathan said a year later, during his second term, will "move our economy up the value chain, spur growth and create fulfilling and well-paying jobs for Singaporeans".

Education got a major boost in 1991, when Mr Wee said the Government would build more schools and train more teachers to improve the ratio of teachers to students.

The aim: to provide each child at least 10 years of primary and secondary education, with a range of educational options catering to different aptitudes.

The Edusave Scheme, which was established in 1993, provides schoolgoing children an account which receives money from an endowment fund.

And increased demand for higher education led to the establishment of the vocation-oriented Institute of Technical Education in 1992, as well as the expansion of the National University of Singapore and Nanyang Technological University.

The period also saw the establishment of Community Development Councils, which provide counselling and job matching services and assist those finding it hard to make ends meet.

Mr Wee in 1991 pointed to a need to consult more widely with people in policymaking.

This point was reinforced by Mr Nathan eight years later: "Each of us must become a participant in building the Singapore we want, and not merely be an observer, a passenger or a critic."

To inspire youth to be more active in community issues, Mr Nathan said in 2005 that the Government will provide seed funding to launch campaigns or movements.

Mr Nathan, in what would be his last President's Address in 2009, called on Singaporeans to "raise our standards of social behaviour, so that Singapore becomes a more pleasant society to live in", as well as develop its arts and culture.

His successor, Dr Tan, added in the next address in 2011: "By helping others, whether through public service, volunteerism or philanthropy, you will strengthen our social compact."