SINGAPORE - Member of Parliament Tin Pei Ling is pregnant with her second child.

The 34-year-old MacPherson single-member constituency MP made the announcement on her Facebook page on Tuesday night (March 27).

She uploaded a photo of her firstborn son dressed in a shirt with the words "Big Brother" emblazoned on it.

She wrote: "So... my little Kee Hau has been such a sweetheart that we decided to promote him #BunInOven #14weeks #CommunityWorkAsUsual."

Speaking to The Straits Times on Tuesday, Ms Tin said her child is expected to be born in September this year.

"When I had my first child I also made my announcement on Facebook," she said. "Both times there were people asking me about it, so now that it's past the first trimester, and it's more stable, I thought I could share this piece of news."

Ms Tin stressed that she wanted "to share assurance that everything will be as usual", saying that she will not be taking breaks until she "pops".

Even then, her team will be supporting her and she is working out arrangements with her colleagues in the Marine Parade cluster on who to take over her parliamentary and community work.

Asked how many children she plans to have, Ms Tin said: "I think I'm happy with two, it's a blessing, so we'll see how."

Switching to Mandarin, she added: "We will leave it to fate." 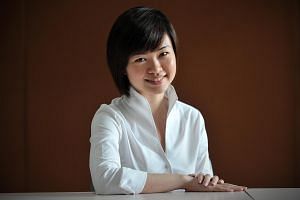 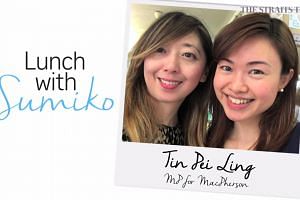 Ms Tin, who has been in politics for seven years, said motherhood has expanded her scope of issues that she cares about and allowed her to appreciate challenges that young parents face.

"In terms of scope of work in the community, that's never changed. I have the same commitments, same dedication," she said.

"(But) in terms of parliamentary work and perhaps even issues that I talk about, the scope has expanded. Because on top of issues I feel strongly about, including health, eldercare, woman issues, things that concern parents (have become) something that is close to my heart.

"Being a mother, (having) the connection or empathy, understanding what young parents have to go through - its a first-hand experience for me, so when speaking with residents there is a better appreciation, of the challenges involved," she said.

She added that issues concerning young children tug at her heart as well.

Ms Tin declined to speak about her husband Ng How Yue, who is permanent secretary for the Ministry of Law.

She had entered politics in the 2011 General Election and won the single seat in MacPherson constituency in 2015, which was also the same year she became pregnant with her first child.

She was then the third MP to give birth while in office, coming behind former Punggol East MP Lee Li Lian, who gave birth to her firstborn in 2014, and Senior Minister of State Sim Ann, who had her third child in 2011.