Former veteran People's Action Party (PAP) MP Tan Cheng Bock says that at the age of 78, he has just a "small window of opportunity" to effect change in Singapore politics.

On plans for a proposed opposition coalition which he has been invited to lead, he wrote in a Facebook post yesterday: "I think I must help but in what capacity, I have not decided."

On Saturday, seven opposition parties met to discuss the possibility of forming a coalition to contest the next general election, to be held by 2021. Dr Tan attended as an observer.

The proposal, announced by the Singapore Democratic Party (SDP), has sparked speculation on such an alliance's prospects and whether such a gambit would work with voters.

Yesterday, opposition politicians said opposition unity is something they have been trying to attain for a while. For one, it allows the smaller parties to stand under a more prominent unified banner. But issues remain to be ironed out, including personality clashes and differences in approaches to politics.

It is unclear if the proposed coalition will include Singapore's two biggest opposition parties - the Workers' Party (WP) and the Singapore People's Party (SPP). Both were invited to the meeting but did not go.

Yesterday, the WP remained non-committal, saying it is "going through a leadership transition and is focused on organisation building to better serve Singaporeans".

SPP chairman Lina Chiam told The Straits Times its priority is "intensive ground engagement to understand the feelings and sentiment of Singaporeans". But, she added, "we are open to having a conversation with Dr Tan Cheng Bock to hear his views and thoughts about the future of Singapore". 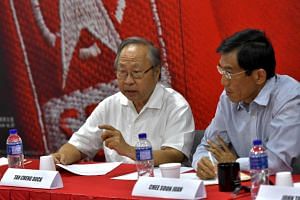 Workers' Party has a role to play in Singapore's political system: PM Lee

The last opposition coalition to be formed here was the Singapore Democratic Alliance, in 2001. It later fractured and faded away.

Mr Goh Meng Seng, chief of the People's Power Party which was at the meeting, yesterday said it is "premature to say this coalition will definitely be formed as there will be a lot of issues to be discussed and sorted out".

In his post, Dr Tan alluded to possible concerns. He noted that the seven parties had not landed a parliamentary seat in the past decade and said he had advised them to put Singapore's interests ahead of their party's interest to do better.

"To be fair, many from the seven parties stood in past elections because they believed they acted in Singapore's best interests. But I think some may also need to stand down and serve from the backroom if it is for the good of the country."

Political observer Derek da Cunha had earlier written on Facebook that "mixing with this particular crowd - which in the pecking order of non-PAP parties rank as third, fourth and fifth raters, will not do anything for (Dr Tan's) reputation".

To this, Dr Tan responded, also on Facebook: "I believe the men and women I met yesterday were more than willing to make way for better men and women who would stand in their place. They have guts. They have put themselves out there."

The former MP of 26 years and presidential candidate added that he "may only have a short time to mentor a team to work for the good of the nation". "I want to put my last years to good use. I want to pass all that I have acquired and learnt in the political arena to the next generation."

The opposition announcement has drawn a mix of reactions across the political spectrum.

Some, such as PAP activist Nelson Goh, 43, who formerly served in Dr Tan's constituency as a grassroots leader, expressed surprise that the opposition parties invited a former PAP politician to lead the grouping. He added: "We should look at the history, performance and conduct displayed by these parties over the last two decades."

Former SPP candidate Ravi Philemon said: "Opposition unity is something that has been spoken about for a very long time.

"Personally, I think the way to go forward would be if SDP would invite Dr Tan to lead that party, while the other existing party members take a back seat and allow him to move things forward. I think many other opposition parties which are not in the coalition would be more amenable to joining such a venture, rather than a loose coalition."

A version of this article appeared in the print edition of The Straits Times on July 30, 2018, with the headline 'Tan Cheng Bock yet to decide on role in proposed coalition'. Subscribe
Topics:
More
Whatsapp Linkedin FB Messenger Telegram Reddit WeChat Pinterest Print Purchase Article Copy permalink