Dr Tan Cheng Bock yesterday announced his second bid for the presidency, confirming talk on the ground that he would seek the office again after losing in the 2011 presidential election.

"The election is 17 months away. I feel it is now timely for me to state my decision: I intend and will contest the coming presidential election in 2017," Dr Tan, 75, said at a media conference at an office space in Commonwealth.

The next presidential election must be held by August 2017. In the past, candidates had announced their plans to contest a few weeks or months before the polls.

Dr Tan's announcement comes amid an ongoing review of aspects of the elected presidency by a Constitutional Commission led by Chief Justice Sundaresh Menon.

But Dr Tan, who was flanked by six supporters of different races, said he was not trying to pre-empt the committee's work.

ON LESSONS LEARNT FROM THE LAST CAMPAIGN

Never mind, we learnt from that mistake. We have to reorganise, we've got to re-plan. We've got to get every sector combed. 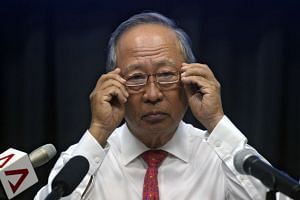 He also dismissed suggestions that the review of eligibility criteria, among other things, was an attempt to disqualify him from running. "I don't think I'm so great that the commission would set out to eliminate me," he said.

Rather, he hopes his early announcement will lay the groundwork for the islandwide hustings to come and avoid the lack of preparation that led to situations such as a shortage of counting agents in 2011.

"In 2011, I was a little bit lost because I suddenly realised that from a tiny constituency in Ayer Rajah, I had to comb the whole of Singapore," Dr Tan said.

"I've contested many general elections. I never take my voters for granted," he added. "When I contested the other elections, I spent years, so 17 months is a good time."

Dr Tan said he will be going around the country to meet Singaporeans, but will not campaign openly, such as by distributing fliers before the official campaign period.

He and supporter S. Nallakaruppan spent the first half-hour of the media conference running through Dr Tan's accomplishments in politics and the corporate world.

They pointed to his strong electoral results as MP, town council experience, and his 20-year chairmanship of investment company Chuan Hup Holdings as credentials that would enable him to carry out the president's duties well.

Dr Tan also presented his vision of the elected president as a unifying figure who is above politics and a guardian of the state's coffers.

Failing to do so would mean he would be an "armchair" or "sleeping" president, he said.

Dr Tan emphasised several times that a president should not adopt what he called a "combative" approach, and that voicing his concerns does not mean open confrontation with ministers and officials.

"I cannot be another opposition in the House," he said.

Instead, he would use what he described as the "soft powers" of the presidency to negotiate behind the scenes when he does not see eye to eye with the Government on its actions. "Sometimes you have to have open confrontation... but there are many times you don't need open confrontation. It's soft selling, negotiation and talking over it," he said.

Ultimately, the president should have the "intention of keeping Singapore stable and not to destroy the country", he added.

Asked if he would give his views to the Constitutional Commission, Dr Tan said he would, but declined to elaborate - saying that was between him and the committee.

As for the review looking at ensuring minorities have enough chance to be elected, Dr Tan said it was a difficult issue for the commission, but he would not tell it what to do.

Dr Tan was also confident about his health, thanks to a good diet and regular exercise, and noted that former Malaysian prime minister Mahathir Mohamad was still trying to influence the path of his country, even though he was 90.

"So if I'm not good in here," he said, pointing to himself, "I will not stand because I will be doing you a disservice."