Former People's Action Party (PAP) MP Tan Cheng Bock has taken the first formal step to form a political party, a move analysts and former MPs said could lead to a tough electoral contest in the western part of Singapore at the next general election.

Dr Tan, a six-term MP who retired from politics in 2006, applied to register the Progress Singapore Party on Wednesday.

He declined to name them, but said in his post that some members were former cadres of the ruling PAP. When contacted, his spokesman said all will be unveiled at a media conference later.

Dr Tan, 78, had run under the PAP banner in the former single-seat constituency of Ayer Rajah since he entered politics in 1980.

In his 26-year political career, he had regularly been among the PAP's top vote-getters. He was also the rare backbencher who had been elected into the PAP's top decision-making body, the Central Executive Committee.

After Dr Tan quit politics in 2006, he continued to be vocal about issues and policies he disagreed with.

In 2011, he contested the four-way presidential election but lost to PAP-backed Tony Tan Keng Yam by a narrow margin of 7,382 votes.

SUPPORT NOT A SURE THING

The operative word is 'had' - it all depends on how his operation moves, the current MPs in the wards he is fighting and how people view him, now that he has changed sides.

FORMER SPEAKER ABDULLAH TARMUGI, who also sits on the Presidential Council for Minority Rights, saying that the support Dr Tan had enjoyed in 2011 was not necessarily in the bag.

Dr Tan said in his post that "the decision to go on our own was not an easy one", adding that he had studied various options, such as joining an existing opposition party and contesting as an independent.

Still, he and his team "look forward to working with others in the opposition who are passionate about putting country first before either party or self", he said.

Noting his age, Dr Tan said he has a short window which he intends to use to develop future MPs.

He added: "We want to build a compassionate and truly democratic Singapore where good values and people matter. Freedom of choice and free speech without fear must be defended."

The Singapore Democratic Party said yesterday that it looks forward "to work with him to strengthen the opposition and bring our nation one step closer to democracy".

According to the Registry of Societies website, the average processing time for registering a society under the normal process is around two months.

Dr Tan's announcement did not surprise political analysts and former politicians interviewed. All of them pointed to the many hints he gave last year, including announcing his retirement as a general practitioner online and saying he looked forward to serving Singapore in a new way.

MAY RETURN TO OLD WARD

I would expect that he will return to his old stomping ground in the West Coast area and ride on the political capital that he has had there.

He had also posted on his Facebook page a picture of him having breakfast with Mr Lee Hsien Yang, the estranged younger brother of Prime Minister Lee Hsien Loong, in November last year. They were eating at a hawker centre in Dr Tan's former constituency.

Last July, he attended a meeting of opposition politicians, and confirmed later that he had been invited to lead a coalition of seven opposition parties.

Observers, like Institute of Policy Studies' deputy director Gillian Koh, said his success depends on several factors, including who his running mates are.

She said that he is likely to "build up his base rather quickly as long as he does not have too many controversial characters in his founding circle".

Former PAP MP Inderjit Singh said Dr Tan's star power may not be enough to win a GRC, which many expect him to contest.

Mr Singh said: "He needs a sure win, especially at his age. If he is contesting in a GRC, at least one of his teammates should be a known entity or a strong candidate. He would need to attract some former MPs."

Mr Singh was quick to add that he was "not considering active politics at this point in time".

Another former PAP MP, Mr Yatiman Yusof, who was a senior parliamentary secretary, said there is a difference between contesting a GRC and a presidential election, which is "more personality-focused".

There was also the spillover effects from the May 2011 GE, which took place around three months before the presidential election. 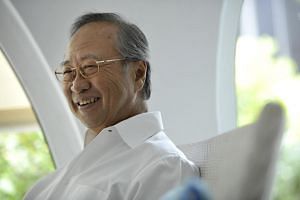 Tan Cheng Bock yet to decide on role in proposed coalition

"The unhappiness was still there and he exploited that, and he coupled that with his track record to gain support," Mr Yatiman said.

"The coming election is different. Singaporeans desire to have the 4G leadership usher them into a new era, and the discerning ones may feel that is a more major issue than having another opposition."

The next general election must be held by April 2021.

Ms Foo Mee Har, the PAP MP in the Ayer Rajah ward that is now part of West Coast GRC, could not be reached for comment.

Observers were divided on whether Dr Tan's move may prompt some PAP cadres to break away.

Mr Singh said: "Greater effort will now be needed from the party leadership to ensure the PAP's strong base of activists is not shaken."

Former Nominated MP Zulkifli Baharudin, however, said the news may strengthen the incumbents.

"If you are running the PAP, you want to be sure that whoever is with you is ideologically strong and not one who gets distracted by the people outside," he said.

He added that Dr Tan's most immediate challenge is convincing people that he is departing from the PAP to champion a certain cause. Part of that task may involve reaching out to those who will see his move as a betrayal.

As Mr Yatiman put it: "Dr Tan has every right as a Singaporean to set up a party, but he should not forget that he became known through the PAP."

Correction note: This report has been edited for clarity.