To keep pace with rising wages, the "local qualifying salary" will be raised to $1,300, up from $1,200, from July, said Manpower Minister Josephine Teo yesterday .

This is the minimum salary a local worker must earn to count towards a firm's quota for hiring foreigners on work permits and S Passes. For example, in the manufacturing sector, firms can hire up to six foreigners for every four locals, under the sector's Dependency Ratio Ceiling (DRC). Two locals who earn between $650 and $1,300 can count as one local when a firm's quota is being calculated.

The cost impact is expected to be small, as was the case in the past when the qualifying salary was raised by a similar amount, said Mrs Teo, in the debate on the Manpower Ministry's (MOM) budget.

The decision to tighten foreign worker policy was very carefully considered, she added, responding to concerns from MPs since last week on the lowering of the DRC for the service sector.

"We decided we need a stronger push to restructure and be more manpower-lean. This will sustain business growth for our companies for the longer term, and help to improve job quality for our workers over time. In the longer term, with these measures, it will make our labour market more resilient," she said.

The quota for S Pass workers - mid-skilled foreigners paid at least $2,300 a month - will drop from 15 per cent to 13 per cent on Jan 1 next year, and to 10 per cent on Jan 1, 2021. Firms that exceed the new levels must meet the quotas when applying for permit renewals.

Over-reliance on foreign manpower is unsustainable

MOM said six in 10 service firms will not be affected as they already operate below the new quotas. The S Pass qualifying salary has also been raised to $2,300 this year, from $2,200. It will be $2,400 next year.

Mrs Teo said the Government will continue to support firms as they transform to become more manpower-lean, such as through the Lean Enterprise Development Scheme, which started in 2015 and provides some flexibility for companies to employ more foreign workers while they train locals to do more high-value jobs. 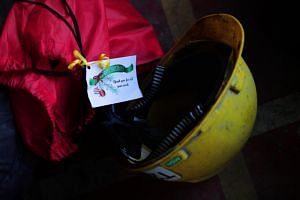 More than 14,000 companies have used the scheme so far.

There are now 350 employers of all sizes on the list, she said.

They come from various sectors, but the five most common are administrative and support services, education, infocommunications, professional services and wholesale trade. The ministry scrutinises the firms' applications for Employment Passes (EPs) more closely. Since 2016, 2,300 EP applications have been rejected or withheld, or withdrawn by employers.

The Tripartite Alliance for Fair and Progressive Employment Practices (Tafep) also investigates feedback about possible discrimination against Singaporeans, and works with firms on the watchlist to improve their human resource practices. So far, 260 firms have left the watchlist, and firms on the list have hired more than 3,800 Singaporean professionals, managers, executives and technicians to date.

For example, said Mrs Teo, one company in the architecture and engineering field was placed on the watchlist in June 2017, but was not interested in working with Tafep. After repeated attempts to engage the company failed, MOM curbed its EP applications.

The firm appealed through its HR manager's MP, claiming that the EP holders were critical for a public sector project. But the ministry found that the company had barely tried to improve its local hiring when it could have, and rejected the EP applications and MP's appeal. In the end, the firm reached out to Workforce Singapore and made plans to take on interns from polytechnics and universities here. It hired 14 more locals over 1½ years.

Budget 2019: Tighter foreign worker quota may be tough on some firms, say panellists

Mrs Teo said employers on the watchlist who use related entities to apply for EPs to try to get around the system will have the work pass privileges of all entities curbed.

The ministry has also been growing its network of progressive employers through the Human Capital Partnership Programme. There are about 540 such firms now, of which four in 10 are small and medium-sized enterprises.

Mrs Teo cited BreadTalk, which runs training programmes, such as online tutorials on food and workplace safety through its in-house BreadTalk University, and created career road maps for staff.

Responding to concerns about whether businesses here will be able to compete globally given the tighter foreign worker rules, Mrs Teo said Singapore must remain open to foreign talent even as the rules are updated.

"There will always be expertise or specialist skills that are in demand globally, but in short supply in Singapore. Our policies must enable Singapore-based businesses to assemble the best international teams to compete on the world stage, and create more quality jobs for our people while we build the local pipeline," she said.

Mrs Teo also questioned the WP on its position on the tightening of the quota in the service sector. WP chief Mr Singh said the party supports the lowering of the DRC: "We feel that we should reduce our over-reliance on foreign manpower where we can. This is so that we can look to raise and improve the job prospects of Singaporeans."