Singapore may not spend as much as other countries on healthcare and education, but the outcomes it achieves in these areas are significant, and better than most.

Social and Family Development Minister Desmond Lee made this point yesterday when he refuted a report which criticised Singapore for being "one of the worst-performing countries in the world at tackling inequality".

The Commitment to Reducing Inequality Index, compiled by non-profit organisations Oxfam and Development Finance International, ranked Singapore 149th out of 157 countries - below Ethiopia and Afghanistan, and above Bhutan and Haiti.

The index measured each country's commitment to reducing inequality by looking at its social spending, tax policies and labour rights.

The report said Singapore's tax system was the worst in the world at tackling inequality because it "undertaxes wealthy individuals and corporations". The personal income tax rate for top earners here is 22 per cent, while corporate tax is 17 per cent, both of which are too low, the report argued.

Mr Lee responded: "Yes, the income tax burden on Singaporeans is low. And almost half the population do not pay any income tax.

"Yet, they benefit more than proportionately from the high quality of infrastructure and social support that the state provides."

He argued that while the report assumes high taxation and high public expenditure reflect commitment to combating inequality, it is more important to look at the outcomes achieved.

"We set out to achieve real outcomes for our people - good health, education, jobs and housing - rather than satisfy a collection of ideologically driven indicators." 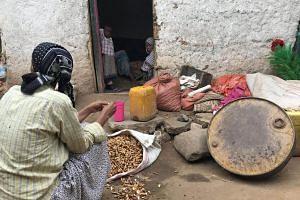 Oxfam, DFI urge countries to do more to tackle inequality

The Oxfam report criticised Singapore for spending "well below countries such as South Korea and Thailand" on healthcare, education and social protection.

Responding, Mr Lee noted that despite the low amount, the Economist Intelligence Unit ranks Singapore second in the world for healthcare outcomes, and the World Health Organisation ranks the Republic's healthcare system sixth in the world.

While Singapore does not have a minimum wage - another point of criticism - Mr Lee said it does have income support for low-income workers, generous schemes for worker training and a progressive wage model for certain low-wage jobs.

Both lower-income and median households here have experienced faster income growth over the last decade than those in most countries, he added.

"That we achieved all of this with lower taxes and lower spending than most countries is to Singapore's credit rather than discredit."

The report also criticised what it called Singapore's "harmful tax practices", such as tax incentives for companies that develop intellectual property, or firms that make investments in the maritime or finance sectors. It said such incentives help corporations evade taxes.

"These tax policies are meant to promote economic development and promote Singapore as a hub in areas such as finance and logistics, which in turn creates jobs," he said.

The report recommended that all countries develop national inequality action plans, which should be funded by increasing progressive taxation and clamping down on exemptions and tax dodging.