SINGAPORE - Countries dealing with Singapore should not take the Republic's consistency, and some would say predictability, for granted, stressed Foreign Minister Vivian Balakrishnan.

"We will always take appropriate measures to safeguard our interests. And any country dealing with Singapore must not assume that it is cost-free to embark on any adventures or antics against us. There will be consequences," he said.

Speaking in Parliament on Monday (Jan 14) on current Singapore-Malaysia tensions over territorial waters and airspace issues, Dr Balakrishnan said this was why Singapore postponed a planned bilateral meeting between National Development Minister Lawrence Wong and Malaysian Minister for Economic Affairs Azmin Ali, as well as officials on both sides.

The Joint Ministerial Committee (JMC) for the development of Iskandar Malaysia had been scheduled to meet on Monday (Jan 14).

Singapore postponed the meeting after an intrusion by Johor Menteri Besar Osman Sapian, who had visited a Malaysian vessel in Singapore's territory on Jan 9 - which went against the spirit of an agreement concluded by the foreign ministers of both countries just a day earlier.

Dr Balakrishnan said: "I hope members appreciate this fine line that I'm trying to follow - to be resolute but to be calm, to quietly but clearly protect our interests. And it doesn't mean we do not have sharp elbows."

He was responding to Mr Vikram Nair (Sembawang GRC) who, while commending the Government for taking a calm and sensible approach to the bilateral tensions, was also concerned that Malaysia's actions were not consistent.

"If one side is being sincere (but) the other side is not or is not able to follow through with actions, what can we do?" he asked.

Singapore will firmly protect her interests

But will the time come when Singapore will make it clear and beyond any doubt that further provocation will be met with an equal reaction, he asked.

Dr Balakrishnan stressed: "I want to clear up this confusion that they are the ones who have the licence to provoke and that we respond but without an equal and opposite response."

But he cautioned: "Red lines are not something you draw lightly and not something which you should pronounce publicly without having carefully thought through all the consequences and without communicating those considerations clearly and unambiguously with the person you are negotiating with or the other side. 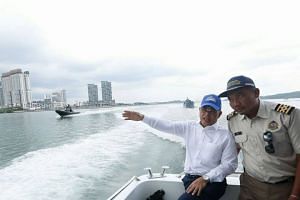 "And I hope members of this House and Singaporeans will understand that some of these are best conducted behind the scenes quietly, and that's why I do not believe in megaphone diplomacy."

In the end, it is Singapore's reputation for consistency and constancy that adds to its reputation of reliability and integrity.

"So that's the way we deal," Dr Balakrishnan said.

"Sometimes, it may come across as we are boringly consistent and we seem to studiously avoid chest-thumping and other manifestations of nationalism. But I would submit that this is the appropriate posture for a small tiny nation state like Singapore."

It does not mean though that Singapore is passive, "not that we give in", he said.

There are different factors at play when such negotiations are conducted.

For example, "simply knowing that we have a credible and strong SAF again makes diplomacy much easier", he said.

Ultimately, the objective is for the spirit of candidness, sincerity and openness to prevail so that the issues can be resolved.

"I can see a way forward to resolve all of them," Dr Balakrishnan said. "And so long as there is a possibility, a probability of resolving it, then our current tack of making sure the situation remains calm, and that we don't allow the situation to escalate out of hand into what I described just now as a downward spiral of measure and counter-measures, is still the appropriate thing to do."

On a positive note and in response to a question by Workers’ Party chief Pritam Singh (Aljunied GRC) on whether the Malaysian government is sincere in wanting to resolve the current tensions, Dr Balakrishnan said that in his interactions with Malaysian Foreign Minister Saifuddin Abdullah and Datuk Seri Azmin, he has found them to be sincere, constructive and helpful.

Dr Balakrishnan stressed that Singapore-Malaysia relations will always be unique and special, "and we must never be surprised both at the upside and the downside".

In some instances, goodwill prevails, he said when responding to Mr Liang Eng Hwa (Holland-Bukit Timah GRC), who asked if the Johor authorities appreciate Singapore's efforts to supply additional treated water to the state.

On Jan 6, Singapore's water agency PUB said it had supplied additional treated water between Jan 2 and 4, at Johor's request after production there was disrupted due to pollution.

Dr Balakrishnan noted that the 1962 Singapore-Malaysia water agreement, which stipulates the price of raw water and the price of treated water, also states that Singapore is obliged to sell to Malaysia only 5 million gallons a day.

In practice, though, Singapore now supplies Johor with 16 million gallons of treated water a day.

"Why do we do it? We do so out of goodwill," Dr Balakrishnan said.

He added: "We hope this goodwill will be reciprocated."