SINGAPORE - Singapore is gearing up for next month's discussion with Malaysia over a territorial dispute, and intends to negotiate with its neighbour "in good faith", said Transport Minister Khaw Boon Wan on Monday (Dec 17).

Mr Khaw said he hopes that "good sense will prevail" and for the dispute, which came to light about two weeks ago, to be managed in a "peaceful, calm and professional" manner.

On Oct 25, Kuala Lumpur unilaterally extended the port limits for Johor Baru port, such that they encroach into Singapore's territorial waters off Tuas.

As a result, Malaysian government vessels strayed into Singapore's waters, and 14 incursions have been recorded between Nov 24 and Dec 5.

As of Monday, two Malaysian ships are in Singapore waters, Mr Khaw said. Reports two weeks ago said there were three ships, and the number went down to one last Wednesday (Dec 12).

" I don't think it is a question of counting one, two, (or) three (ships). I think our preference - in fact, that is what we urged them to do - is to withdraw all the ships, because it's not conducive," he told reporters in an interview to round up his ministry's performance this year.

Reiterating a point he made last week, Mr Khaw said the presence of Malaysian ships does not make any difference to Malaysia's legal claims over the disputed waters. 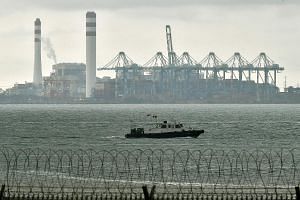 He added that their presence is worrying as accidents can happen.

Singapore and Malaysia have agreed to meet in the second week of January to discuss the maritime dispute.

In response to the expanded Johor Baru port boundaries, Singapore extended its own port limits on Dec 6, a move that drew protest from Malaysia.

Last Wednesday (Dec 12), Singapore also took steps to ensure that no country would be able to unilaterally initiate third-party arbitration or adjudication on maritime boundary disputes against the Republic.

It filed a declaration under the United Nations Convention on the Law of the Sea (Unclos), and informed Malaysia of this move. Both Malaysia and Singapore signed Unclos in 1982.

Besides the maritime dispute, Malaysia has also protested against new flight procedures that Singapore will implement next year at Seletar Airport, claiming they will stunt development in the Pasir Gudang area.

Asked if there would be any bilateral talks to resolve the matter, Mr Khaw said he was sure the issue would be on the agenda of next month's discussions.