BANDAR SERI BEGAWAN - Financial cooperation between Singapore and Brunei received a boost on Saturday (May 12) with the signing of two new agreements.

The signings of the agreements - a memorandum of understanding (MOU) to exchange information related to money laundering and terrorist financing, and a financial technology agreement seeking to boost innovation in financial services - were witnessed by President Halimah Yacob and Brunei Sultan Hassanal Bolkiah.

Madam Halimah, who is on a four-day state visit to Brunei, also attended a welcome ceremony at the Istana Nurul Iman where she was given a 21-gun salute.

She had a bilateral meeting with Sultan Bolkiah before the agreements were signed.

The FinTech agreement between the Monetary Authority of Singapore (MAS) and the Autoriti Monetari Brunei Darussalam will see the two countries sharing information on FinTech developments and trends, provide referrals to FinTech firms in the respective countries, and potentially undertaking joint innovation projects.

This builds on 20 other such agreements that MAS has signed with other countries and territories, including Hong Kong, Abu Dhabi and Britain. 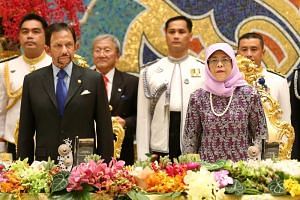 The other MOU, between Singapore's Suspicious Transaction Reporting Office (STRO) and the Financial Intelligence Unit of Brunei Darussalam, was first mooted in 2008.

It will provide for the exchange of information such as suspicious transaction reports, cross-border movement of cash, or casino cash transaction reports to combat money laundering and terrorist financing. STRO has signed 38 MOUs in this area, and received nine letters of undertaking from foreign counterparts.