Continued engagement of Beijing and Washington in Asia-Pacific has been good for region: PM

Fresh from an official visit to the United States and ahead of a trip to China next month, Prime Minister Lee Hsien Loong yesterday spoke of the importance of Singapore maintaining good relations with both countries.

Noting that Chinese President Xi Jinping recently said the US and China should cultivate common circles of friends, Mr Lee said Singapore aims to be within those circles. This is because the continued engagement of both countries in the Asia- Pacific has been good for the region.

The US brings trade and investments while maintaining security and stability, allowing countries to thrive and compete peacefully.

China's increasing prosperity since embarking on economic reform 40 years ago has also benefited Asia and the world. "An unstable and backward China will cause Asia great trouble, as happened in the 1950s and 1960s," Mr Lee said.

He was hosted to a state dinner at the White House earlier this month, the first for a Singapore prime minister in more than three decades.

The official visit was "a signal that the US values its friends and partners, and appreciates Singapore's support for the role that America has played in the Asia-Pacific for more than 70 years", he said. 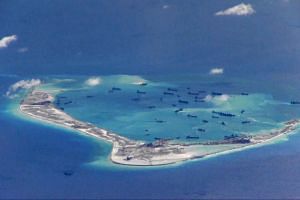 National Day Rally 2016: Singapore must stand by its principles on South China Sea

Next month, Mr Lee will visit China, including Chongqing, where the third government-led project between China and Singapore was launched last November.

The US and China strive to be on good terms, he said, as both believe that the Pacific is vast enough to accommodate the two powers, which view their presence in the region as vital to their national interests.

But difficulties with both countries have cropped up before, he noted. This included when Washington protested against the caning of US teenager Michael Fay here in 1994 for vandalism.

Issues with China also surfaced when Beijing felt that Singapore did not sufficiently defer to its interests, Mr Lee said. "Sometimes the interests of our friends will conflict, and we will be pressured to choose sides."

In a reference to the South China Sea dispute, he added: "Sometimes, if you read the foreign media, including the (Chinese) media, you will find articles criticising Singapore for not siding more with them."

He was aware that some Singaporeans were concerned about these criticisms, as their friends and business partners say any tension between Singapore and China would affect business and collaboration.

While Mr Lee understood these concerns, he said the Government "has to take a national point of view, decide what's in Singapore's overall interest".

He also assured Singaporeans that Singapore's relationship with China is much broader than the single South China Sea issue.

He pointed to the Chongqing Connectivity Initiative, a government- to-government project which follows the Suzhou Industrial Park and the Tianjin Eco-city.

Also, Singapore is working with China on the One Belt, One Road infrastructure and economic strategy, and participating in the China- backed Asian Infrastructure Investment Bank.

Mr Lee reiterated that on the South China Sea, Singapore does not take sides on the specific claims of any country.

Instead, it has to uphold its own independent and considered stance so that Singapore's hard- earned reputation as a credible and reliable entity on the international stage can be maintained.

A version of this article appeared in the print edition of The Straits Times on August 22, 2016, with the headline 'Singapore aims to be within US, China circles of friends'. Subscribe
Topics:
More
Whatsapp Linkedin FB Messenger Telegram Reddit WeChat Pinterest Print Purchase Article Copy permalink