SINGAPORE - Members of Parliament and politicians have reacted to the new electoral boundaries soon after they were announced on Friday afternoon.

Minister for Education Heng Swee Keat said that he expects strong contest in the coming election, but the People's Action Party (PAP) is ready.

"Boundary changes or not, we will continue to serve our residents and provide the best policies for Singapore. This election is going to see strong contest, we are ready, we are prepared," he said, adding that he hopes Singaporeans will give the PAP their support.

Transport Minister Lui Tuck Yew said he was disappointed that his current constituency - Moulmein-Kallang GRC - has been "divided up". He did not reveal what lies ahead for him in the coming general election but said he has "some idea of what the possible plans".

The PAP team in Moulmein-Kallang won 58.6 per cent of the votes in the constituency against a Workers' Party (WP) team.

The other current MPs for the soon-to-be-defunct GRC are Minister of Communications and Information Yaacob Ibrahim, Ms Denise Phua and Mr Edwin Tong. 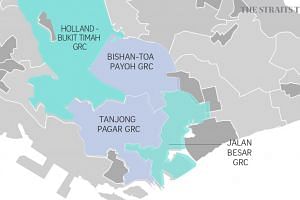 13 SMCs in coming election, including 3 new ones 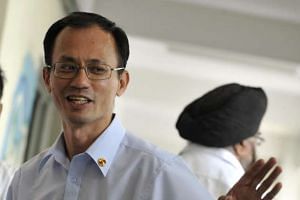 The GRC was among three constituencies that have disappeared from the electoral map.

"For me of course there's a sense of disappointment because I've been with the residents for so many years and I've really come to grow to be very fond of them and I will miss them dearly," Mr Lui said.

He said that the change would come as a surprise to the grassroot leaders and branch activists, but urged them to consider the larger picture.

"We have to understand why this is happening - because I know PM has given the guidelines to the boundaries committee to have smaller GRCs... naturally the boundaries will have to shift and I think in this case Moulmein is one of the more affected constituencies."

Dr Yaacob, in a Facebook post, said "wherever I am called, I will continue to do my best to serve my residents in the area".

"I welcome back the Jalan Besar name, and I believe many residents will too. The name “Jalan Besar” has been around for over 50 years, and many residents can identify the place with the name."

Minister in the Prime Minister's Office Chan Chun Sing, who is the MP for Tanjong Pagar GRC, said "our ties with residents of Moulmein will be renewed".

PAP MP Tin Pei Ling said she hopes  "to have the opportunity to continue serving MacPherson". Her ward, which was part of Marine Parade GRC in 2011, has been carved out as an SMC.

Mr Tan Jee Say of the Singaporeans First (SingFirst) party was one of the first to level accusations of gerrymandering.

"All this talk about size being an issue doesn't hold anymore. If size was a concern, they would have reduced Ang Mo Kio, so it means that the reason they gave is not true," he said.

Ang Mo Kio GRC is one of two six-member GRCs and is helmed by Prime Minister Lee Hsien Loong.

He also said that Joo Chiat SMC and Moulmein-Kallang GRC were redrawn as the ruling party was "at risk of losing".

Mr Tan said his party's plan to contest in Tampines and Marine Parade GRCs will be affected by the boundary changes as there is "overlap" in the areas the opposition parties have expressed interest in.

"We have talked to NSP (National Solidarity Party) and WP (Workers' Party) about Marine Parade, and we eventually will discuss with all parties," he said. "Of course we are interested in contesting MacPherson," he added.

He said: "SDA will definitely contest Pasir Ris-Punggol. If there were a major change, our efforts over the last four years would have gone down the drain. There won't be disruptions to our planning now."

He said the SDA is open to collaborating with other opposition parties to avoid multi-cornered contests, but it will no longer host talks among the parties, in a break from previous years.

"We were the host of past opposition meetings, but there are no plans to do so now. I'm not in the position to mobilise the opposition parties to sit down and talk."

Joo Chiat and Whampoa SMCs are two other wards that were folded into other constituencies.

Non-constituency MP Yee Jenn Jong of the Workers' Party appeared upset that Joo Chiat, which he contested in 2011 - is now off the map.

He got 49 per cent of valid votes in the 2011 election, narrowly losing the ward to PAP MP Charles Chong.

He said on Facebook later that he was "absolutely disappointed" with the report.

Other politicians whose SMCs were retained greeted the report more positively.

Potong Pasir MP Sitoh Yih Pin was happy that Potong Pasir SMC was unchanged. He won against Singapore People's Party Lina Chiam with a razor-thin margin of 114 votes - or by less than 1 per cent of the ballots cast.

"I am very happy, because for the last 15 years, we have been working hard to build our relationships with our residents. With the boundary (of Potong Pasir) intact, we hope to be given another chance to continue on the journey that we have started," he said.

Yuhua MP Grace Fu said on Facebook she hoped to stand in the constituency again.

Ms Jeannette Chong-Aruldoss, who ran in Mountbatten SMC as an NSP candidate, promised she would be back in the constituency.

She joined the Singapore People's Party in March this year.