The battle for Sembawang GRC is shaping up.

The People's Action Party (PAP) slate of candidates is starting to take shape in the five-MP GRC that was substantially affected by new electoral boundaries last week, and its MPs have begun working the new ground.

Party chairman Khaw Boon Wan yesterday said he and his team were reaching out to the 53,177 new voters added to Sembawang GRC from areas that were under Nee Soon GRC, while "handing over" the areas with 61,061 voters that have been carved away to the new Marsiling-Yew Tee GRC.

In the 2011 General Election, Sembawang GRC saw a contest between the PAP team and a Singapore Democratic Party (SDP) team. 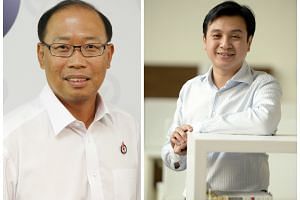 First-term PAP MPs say they are ready for a contest

The PAP won 63.9 per cent of the vote against the SDP, whose slate included academics James Gomez and John Tan.

The SDP confirmed it will again contest the GRC at the coming general election. But party leaders have yet to name their slate for the GRC.

This leaves a spot open in Sembawang GRC. But Mr Khaw would not confirm if lawyer Amrin Amin, 35, a PAP new face spotted in the GRC, will join his team.

But he added: "He's in my group. He's proactive. I need a Malay after (the) carving out of Marsiling."

The two other MPs in the Sembawang GRC team are Ms Ellen Lee and Mr Vikram Nair.

Mr Khaw gave the likely line-up for his GRC - and partially for Marsiling-Yew Tee GRC - to The Straits Times when he met Nee Soon GRC MP Lee Bee Wah at a coffee shop in Yishun Avenue 11.

His disclosure reinforced a point that PAP organising secretary and Defence Minister Ng Eng Hen made at a SingHealth Nurses' Day event yesterday: that the party would disclose its slate of candidates early, probably well ahead of Nomination Day.

At the meeting between Mr Khaw and Ms Lee, she briefed him about the 51 blocks that were being transferred to Sembawang GRC following the boundary changes.

Mr Khaw said boundary changes have the greatest impact on the PAP, and in some cases are "quite drastic ... We've invested time. Now, new relations have to be forged".

Losing Marsiling, which has a predominantly elderly population, Mr Khaw said, will lower the median age for Sembawang GRC and bring it nearer to the national median age of just over 40 years.

Yesterday, SDP members went on a walkabout in Holland-Bukit Timah GRC, and party activist Paul Tambyah said it would return to the areas it contested in 2011 - including Sembawang - "because the residents know who we are".

"We have been going back there over the years... on a regular basis, so these are a natural fit for us."

That opposition parties aim to contest all 89 seats at the next general election, is a prospect relished by first-term Tanjong Pagar GRC MP Chia Shi-Lu.

Speaking to reporters at an event yesterday, he said that he and his fellow GRC MPs were at a "disadvantage" as theirs was the only uncontested constituency in 2011.

As the GRC, previously helmed by the late Mr Lee Kuan Yew, has no history of contests to indicate how it would do in the face of a challenge, "we actually have to work harder than most others", he added.

This is why the team campaigned in 2011, going door to door and meeting residents, as if they were facing a real election.

"We take nothing for granted because of this unknown element, which I suppose spurs us to work even harder," he said.

But the SDP, which said in January that it was also considering Tanjong Pagar, confirmed yesterday that it would not target the GRC.

Said Professor Tambyah, who was accompanied by SDP chief Chee Soon Juan and party activists: "Many people in Tanjong Pagar are very keen to vote but, at the same time, there are many other parties that have expressed interest."