He criticises PAP's use of managing agents, says he will oversee the work personally

Bukit Batok residents will have a full-time MP and a town council that will be run with more transparency and accountability than any other, Singapore Democratic Party (SDP) candidate Chee Soon Juan said last night.

This would be the case if he wins the May 7 by-election, he said in his first rally of the campaign.

In an hour-long speech in four languages and a dialect, he outlined his plans to ensure a smooth handover of the town council. 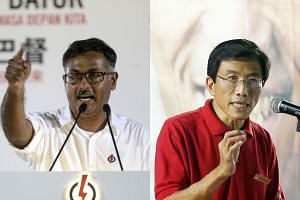 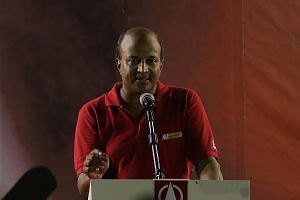 Residents trust PAP to look out for their interests: Murali

These included the team that the SDP has assembled to get the job done, and the goals the town council would achieve in its first 100 days after it took over.

He also touched on several issues during the rally, including what he said was the Government's failure to boost productivity, its decision to ring-fence Singaporeans' Central Provident Fund savings, and high ministerial salaries.

The opposition veteran, who is contesting his fifth election, said he was excited about the by-election, as it presented the SDP with an opportunity to run a town council and accomplish "bigger and better things" with the community.

"Running the town council will allow the SDP to shine and demonstrate our competence," he said.

A transition team comprising four accountants, three estate managers and six lawyers has been formed to "make sure that the new SDP-run (Bukit Batok) Town Council works without a hitch, all from Day One", he said.

Within the first 100 days, the town council will publish a comprehensive report of the handover, a clear budgetary plan, its first interim financial report, its workplan for the first 12 months, and estate maintenance strategies, he added.

"Why do we go through the whole trouble of telling you specifically what will be done by whom and by when?

"We do this because we not only want to match the current levels of management of PAP-run town councils, we want to surpass them," he said.

"We want to set new standards for transparency and accountability in town council governance. We do this because we want to be held accountable."

He criticised the People's Action Party (PAP) for employing managing agents to run its town councils. He said this unnecessarily raised expenses for residents.

Under the SDP's plan, Dr Chee will dispense with a managing agent and personally oversee the running of the town council.

The SDP will also "employ experienced managers to head the various departments".

To show that it was serious about ensuring a smooth takeover should Dr Chee win, the party invited Mr Yeo Yeu Yong, chief executive officer of facilities management firm Primech Services International, to speak at the rally.

Mr Yeo, 67, is part of a four-man team that will act as a resource panel to advise the SDP on town council issues in the first 100 days.

Mr Yeo said he previously ran a company that had contracts "spread across many town councils", and which won contracts with various agencies such as the Housing Board, National Parks Board and ground-handling firm Sats.

Other speakers like medical professor Paul Tambyah stressed that estate upgrading and neighbourhood renewal programmes will continue even if the SDP wins at the polls.

Dr Tambyah pointed to how the Eunos Spring Neighbourhood Renewal Programme went ahead even when the Workers' Party won in Aljunied GRC in 2011. Hougang has also undergone the HDB's Remaking Our Heartland programme "despite the fact that Hougang has not had a PAP MP for more than 25 years".

Last night, Dr Chee reiterated that he will be more committed to residents than his PAP opponent, lawyer Murali Pillai, can be.

"Mr Murali's choice of not committing himself full-time to Bukit Batok... does reflect what is closest to his heart," he said, referring to Mr Murali's remarks that he can put Bukit Batok residents first while continuing to practise law.

"Me? There is no question, my heart is here full-time in Bukit Batok."