The drones used in the Sept 14 attack were highly sophisticated, able to avoid radar detection and hit their targets with precision.

But Dr Ng said simpler "toy drones" used by hobbyists are just as capable of causing disruption, as was seen recently at England's Gatwick Airport and Changi Airport.

"Against this wide spectrum of threats, there can be no single counter-response," he said.

"So it would neither be proportionate nor sustainable to employ sophisticated assets worth hundreds of millions to take down hobbyist drones that can be bought for less than a thousand dollars."

For such threats, other tools would be required, such as regulations, deterrent fines and penalties, education and working with stakeholders, including drone-hobbyist communities, he said.

Dr Ng was replying to three MPs who had asked how Singapore could prevent such an attack and the economic impact on petrol.

The pre-dawn attack in Saudi Arabia knocked out more than half of the top global exporter's output: 5 per cent of the world's oil supply or about 5.7 million barrels per day.

He also spelt out the various authorities' scope of work: the Transport Ministry is working on some laws to stiffen penalties for drone users who flout the rules, while the Home Affairs Ministry and the police take the lead in defending against drones in specific areas and during major events.

The SAF will help them when called on and when needed, he added. Beyond these specific responsibilities, the SAF "remains responsible for drone attacks against Singapore by would-be aggressors, especially towards key installations". 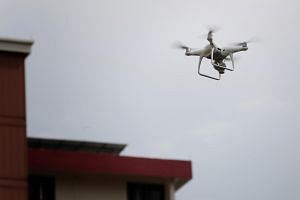 In the last decade, it has strengthened its air defences against drone attacks, like using better sensors in its early-warning systems.

"The assets we have in place now would have been able to detect the alleged drones used in the attack on oil facilities in Saudi Arabia," he said. After being identified, the drones would have been taken down by ground air defence systems, which have been upgraded.

"The SAF is confident these systems can protect Singapore against aerial threats from both manned and unmanned aircraft. Our air defence system is live, 24/7," he said.

To combat drones that can carry smaller weapons like grenades, the SAF puts up extra sensors and counter-offensive capabilities when required, such as during the National Day Parade or the Trump-Kim summit last year.

He told the House the SAF will continue to monitor threat developments and learn from all world incidents to respond in a manner that is commensurate with the level of threat, sustainable and cost-effective.