SINGAPORE - Recent events have called into question the integrity of the public service, and some have asked whether it can be trusted to know its own blind spots or to take responsibility for mistakes, said Trade and Industry Minister Chan Chun Sing on Tuesday (April 16).

These questions go to the "heart" of what the public service stands for, Mr Chan said in a speech at the annual Administrative Service dinner and promotion ceremony.

Integrity for the public service, he added, means two things: recognising strengths and weaknesses and acknowledging the need to do better, and taking responsibility for what it does.

While the minister did not specify which recent events he was referring to, there have been a series of lapses in the public sector. These include the SingHealth data breach in which hackers stole the personal data of 1.5 million patients, the leak of HIV patient data and the personal information of blood donors being improperly put online by an IT vendor.

Mr Chan said that for the public service to check its own blind spots, officers must never believe they have all the best ideas, all the necessary skills or that they can carry out the tasks alone.

To this end, the public service must build diverse teams for resilience, he said. "A good public service needs teams who can do policy well, have operational experience on the ground, can communicate well, and have international exposure and perspectives."

"And this is why I ask the public service to review the way we select and develop our leaders," he told the gathering of 300 at Park Royal hotel in Beach Road. During the ceremony, 13 officers were appointed to the Administrative Service and another 59 were promoted.

The minister said he was glad the Head of Civil Service, Mr Leo Yip, and the Public Service Commission are reviewing the way officers are selected and groomed.

He noted there is a "very refined system" of selection and progression now, and the more refined it is, the greater the danger that all the officers are measured with the same yardstick.

"But if we are all of the same, it can make us brittle and fragile as a system. We need to build our resilience through diversity of strengths and bond the individuals into a cohesive and coherent team," he said.

He added that efforts will be stepped up to send officers to private companies, non-public agencies and on overseas postings to learn, observe and bring back insights to strengthen the public service. 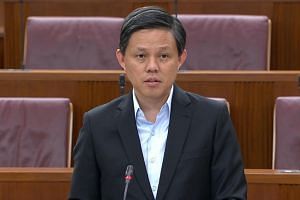 'No joy' for public service in recovering from mistakes fast, more important to prevent them

As a political office-holder, it is his job to "stand in the gap" and his duty to take the public pressure, he said. This is so the public service can do its job properly without undue public or short-term pressure, and will have the confidence to try new ideas.

But, it is also the responsibility of the public service to not second guess, and to always put up the strongest options for political office-holders to make the collective call.

While noting that the public service has served Singaporeans well all these years, it is far from perfect. It faces the risk of becoming complacent and stagnant as it becomes more successful and structured, he added.

Success for the public service, Mr Chan said, needs to be defined against three benchmarks: Its ability to preempt tomorrow's challenges; its ability to continuously improve today's services; and its values of service, integrity and excellence.

In his speech delving into the spirit of public service, Mr Yip also touched on the responsibility which leaders in the public service must shoulder.

"The people, systems, processes and outcomes in an organisation are a leader's responsibility. If lapses happen as a direct result of our leadership slackness, negligence or incompetence, we will rightfully have to be personally accountable as the leader," Mr Yip added.