SINGAPORE - Keeping half of Singapore's earnings from its reserves is important as it signals to currency markets the strength of the Singapore dollar, Minister in the Prime Minister's Office Chan Chun Sing said on Saturday (Feb 24).

Mr Chan cited this as "yet another important reason" the Government does not spend more than half of returns from the national reserves.

His defence of the Government's position came at the end of a week when calls were made to raise the 50 per cent spending cap, so as to reduce the need to hike taxes -after it was announced that the goods and services tax (GST) will go up from 7 per cent to 9 per cent some time between 2021 and 2025.

Under the current Net Investment Returns Contribution framework, the Government is allowed to spend on current needs up to 50 per cent of actual income and long-term expected returns from past reserves. This contributed $14.6 billion to last year's budget - about 16 per cent of total revenue.

Speaking at the annual Lunar New Year dinner for Tanjong Pagar GRC and Radin Mas SMC, Mr Chan drew the link between beefing up the reserves and the strength of the currency - noting that this had implications not just for future Singaporeans, but present ones as well.

"If the world thinks we are running an irresponsible or unsustainable fiscal policy, you can well imagine what they will do to the Sing dollar," he said, before noting the reverse relationship: "If the world does not believe in the strength and stability of the Sing dollar, you can also well imagine what will happen to our savings and our reserves."

This is why Singaporeans should not take the use of reserves lightly, said Mr Chan, who is also leader of the labour movement.

He noted some present benefits of having a strong currency: It allows citizens to enjoy more affordable imported goods and cheaper holidays. 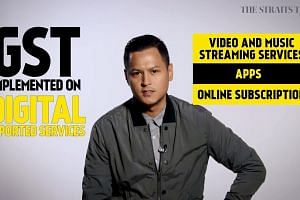 This was one of two arguments Mr Chan made to explain the 50 per cent cap. The other argument emphasised the importance of setting aside more for future generations, especially as the population is ageing.

Though the full size of Singapore's reserves is not revealed to the public - to protect the country from currency attacks - it is estimated at more than $1 trillion.

In a wide-ranging 25-minute speech, Mr Chan - seen as one of the frontrunners to be the next prime minister - also spoke on other long-term priorities set out in this year's budget, including productivity growth, education and infrastructure projects.

On raising productivity, Mr Chan noted the importance of the task, given that Singapore cannot rely solely on manpower growth - as a larger foreign workforce will come with social integration issues.

"As our ageing population grows, we must find ways to take care of our elderly without committing a disproportionate part of our workforce to the care sector alone," he said.

On education, Mr Chan stressed lifelong learning, as well as the need to invest in early childhood education, to level the playing field for less-privileged pupils.

"Even as economics and human nature threaten to make society more unequal over time, we must redouble our efforts to ensure that every Singaporean child has the best chance in life to fulfil his or her potential in different and multiple dimensions," he said.

On investing in infrastructure, Mr Chan said this will make Singapore attractive to companies, and will create "good jobs for our people".

Singapore is building for the next 100 years, "with investments in an underground electricity distribution network to replace the ageing electrity network left for us by the British", while making sure that land reclamation can withstand global warming and the rise in sea levels.

He cited developments such as the Tuas Mega Port and the Deep Tunnel Sewerage System, noting that the latter helps ensure as much water is recycled as possible, so that Singapore will have adequate water by the 2050s - "before the (2061) expiry of the Second Water Agreement with Malaysia".

Beyond the 2050s, Singapore will also look to redevelop the next generation of Housing Board flats, to make each estate a microcosm of Singapore, he said.

"We will overcome the current situation where we have an age gradient in our towns - from Tanjong Pagar, on average, having the oldest flats, to Punggol in the north having the newest flats," he said.

"Tonight, as in previous Lunar New Year dinners, I have chosen to speak frankly with all of you about our challenges," he said, near the end of his speech.

"We have strong fundamentals. But we must make sure that we maintain such fundamentals, and maintain our discipline, so that we can continuously  provide our people with the best opportunities... So long as we stay united, be clear eyed about our challenges, and face them squarely together, there is absolutely no reason why we cannot celebrate SG100 with even greater pride and confidence."