LIMA, PERU - Countries in the Asia-Pacific should not turn back the clock on free trade in spite of political pressures to do so, Prime Minister Lee Hsien Loong said on Friday (Nov 18).

He reminded fellow leaders and business chiefs that closer economic integration over the past 26 years, since the Asia-Pacific Economic Cooperation (Apec) forum began in 1989, has brought prosperity to the region, creating jobs and improving lives.

"While it is difficult to take dramatic new initiatives in this prevailing climate, let us do our best to hold on to the progress we have achieved over the past two decades," he said.

We should "not do things that will hurt ourselves and lead to retaliation, undoing the progress that we have achieved," he added. 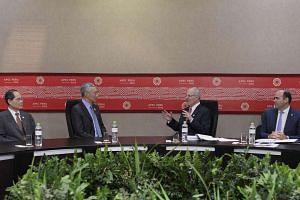 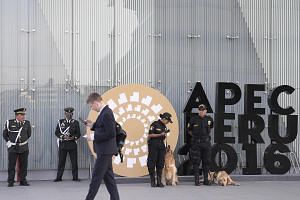 Leaders of the 12 nations that signed the Trans-Pacific Partnership (TPP), including Singapore and Peru, will also meet United States President Barack Obama to discuss a way forward for the pact, which US President-elect Donald Trump has said he will not support.

Mr Lee told the CEOs that while the TPP may be delayed for now, there are still other pathways for Apec members to work towards their long-term goal of a Free Trade Area of the Asia-Pacific (FTAAP).

The Regional Comprehensive Economic Partnership that Asean and six partners are discussing, the Asean Economic Community, and the Pacific Alliance can be "building blocks drawing economies towards an eventual FTAAP", he said.

Mr Lee noted that the world economy has had a difficult time since the 2008 global financial crisis. Recovery in the US remains weak, European economies are stagnant, while growth in Asia has slowed down.

Meanwhile, there has been a "nativist response and reaction in developed countries by those who blame globalisation for making them worse off", he said.

This is seen in Britons voting to leave the European Union and the rise of populist, extreme political parties in Europe. Also, in the recent US presidential election, lower- and middle-income white voters, whose incomes have not gone up, backed an anti-trade platform.

Still, technology and globalisation remain the most effective ways of raising living standards.

"We cannot improve our lives by doing things the same old ways," Mr Lee said. "Lives only improve when we do things better, through new techniques, new scientific discoveries, new products, new ways of working together."

But governments need to recognise that technology and globalisation can cause disruption.

"There will be winners and losers. We need to... help all segments of our population adjust," he added.

This calls for inclusive policies to provide affordable healthcare and stronger safety nets, and to invest in lifelong learning for workers to earn their share of growth.

Mr Lee said there are still bright spots, like Asia, and opportunities around the world that can be accessed via technology and globalisation. "But we need to adapt, be ready to take advantage of technology and press on with free trade amid political pressures. That is how we can deliver growth and improve the lives of our people," he said.