SINGAPORE - Prime Minister Lee Hsien Loong has said that he is "deeply saddened" that his sister, Dr Lee Wei Ling, had accused him of abusing his power to commemorate the first anniversary of their father's death in order to establish a dynasty.

"The accusations are completely untrue," PM Lee said of Dr Lee's comments, which she made public on her Facebook page earlier on Sunday (April 10).

In a Facebook post on Sunday evening, PM Lee said that he had discussed the commemorative events with his Cabinet and advised that these should be ground-up efforts, and groups "should keep their observances in proportion, and focused on the future".

He added: "The idea that I should wish to establish a dynasty makes even less sense. Meritocracy is a fundamental value of our society, and neither I, the PAP, nor the Singapore public would tolerate any such attempt."

Dr Lee had written a series of posts on Facebook over the past fortnight expressing her disagreement over the activities held to mark the first anniversary of the death of her father, founding prime minister Lee Kuan Yew, who died on March 23 last year at the age of 91.

In an e-mail she made public on Sunday, Dr Lee, referring to PM Lee by his initials, said: "HL has no qualms abusing his power to hv a commemoration just one year after LKY died, 'least (sic) we forget'. Let's be real, last year's event was so vivid no one will forget it in one yr. But if the power that be wants to establish a dynasty, LKY's daughter will not allow LKY's name to be sullied by a dishonourable son."

She also said she had been "at odds" with PM Lee "on a matter of principle".

The e-mail, addressed to The Straits Times associate editor Ivan Fernandez, was part of an exchange between Dr Lee and Mr Fernandez, which she posted on her Facebook page on Sunday.

In his post, PM Lee said that the first anniversary of a person's passing was a significant moment "to remember him and reflect on what he meant to us".

"The more so with Mr Lee Kuan Yew," he added.

He said the Cabinet had discussed how the occasions should be marked, and his advice was that it should be left to ground-up efforts, with observances kept in proportion, and focused on the future.

He said: "The Cabinet recognised the strong desire of many Singaporeans to show their respect for Mr Lee, and honour what he did for us. We reviewed the events and observances that different groups had planned, and agreed that they were generally appropriate. They expressed the sincerely felt sentiments of Singaporeans, which my Cabinet colleagues and I deeply appreciate."

Dr Lee's latest post comes some two weeks after she published a commentary on her Facebook page on March 25, saying that her father would have "cringed" at the commemorative activities held to mark the first anniversary of his death.

Editing is not the same as censorship

Dr Lee had submitted that commentary to The Straits Times and issued an ultimatum to the editors to run it in full, saying she would otherwise post it online in its entirety.

After subsequent posts by Dr Lee, Mr Fernandez on Saturday wrote a detailed explanation of why the paper refused to publish her column. He said almost three-quarters of the parts that she added to her commentary - on how China's former leader Mao Zedong and former British prime minister Winston Churchill were honoured after their death - had been plagiarised from other websites.

This prompted Dr Lee to say on her Facebook page on Saturday that she would "leave my readers to judge me fairly, whether I intentionally plagiarised or as a filial daughter I wanted to stop any attempts at hagiography at the first anniversary of my father's death".

She wrote on Facebook on Sunday that she had decided to put up the entire e-mail correspondence between her and Mr Fernandez to show that she "did not attempt to plagiarize" but "simply forgot to acknowledge the source for information regarding Mao and Churchill".

She also said in her post that those who edited her columns had been "commanded to edit certain issues out". She made a similar claim in her e-mail, saying: "The powers that be commands SPH, and no one in SPH dares to stand up to the powers that be to say, 'you cannot abuse your power'. I will do so." 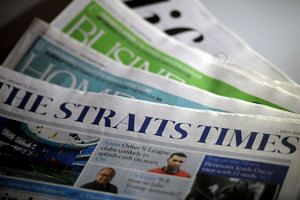 Responding to Dr Lee's comments, Straits Times editor Warren Fernandez said: "Dr Lee's latest allegations are unfounded. Having first targeted ST, without any basis, she now charges the Government with seeking to suppress her views in the media for its own political purposes.

"As for the plagiarism in her column, which was a serious infraction, especially as our editors had previously warned her about the pitfalls of copying material without attribution, she now says both that it was unintended as she had 'forgotten' to cite her sources, and besides, her end of exposing the Government justified it anyway."