In a letter on how the ruling party MPs should conduct themselves, he told them to be prepared to engage the opposition, to clarify their interventions and scrutinise their ideas.

"PAP MPs should express their views frankly, whether for or against government policies. During debates, speak freely and with conviction. Press your points vigorously, and do not shy away from robust exchange," he said in the eight-page "rules of prudence" traditionally issued to PAP MPs after each general election.

The ruling party won 83 out of 93 seats and 61.2 per cent of the votes in the July 10 polls in which all seats were contested.

Noting this, PM Lee, who is the head of the PAP, said: "The people have endorsed what we have done in our previous term, and given us a clear mandate to take Singapore forward, through the crisis and beyond.

"Now we must work with Singaporeans to keep Covid-19 in check, protect jobs and livelihoods, and make sure everyone comes through safely together."

In a new section in the letter, PM Lee also specifically addressed the use of social media by MPs.

Social media has become a part of daily life and MPs are free to use it to let the public know about their work or their views, he said, urging MPs to "have some fun" and to "try out different platforms".

But he also asked them to be mindful as elected officials and public figures.

"So observe decorum, ensure factual accuracy, as this is an absolute requirement for us, and remember every social media post will be permanently associated with you and the Party," he said.

"Be honest, empathetic, positive and affirming in all your messages. Know your audience and be sensitive to how they feel. Do not use social media to attack another person."

PM Lee also reminded MPs that social media is but one way to connect with people, and they have to attend to residents' needs and interact with them in person. 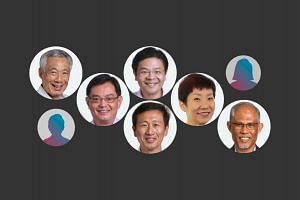 PM Lee calls for unity, political leadership for S'pore to tackle Covid-19 crisis as new Cabinet is sworn in

In the rest of the letter, he reiterated points he has been making over the years on the need for PAP MPs to uphold the party's reputation for clean and incorruptible government.

To this end, they should separate their public political status from their private business or professional interests, PM Lee said.

This means that MPs should, among other things, be careful of the invitations and gifts they accept, and ensure they do not lobby public officers on behalf of friends, clients or the like.

MPs also should not solicit directorships or accept those where the company wants to "dress up the board with a PAP MP or two, in order to make the company look respectable".

As MPs, they must also always listen closely to Singaporeans and help them to tackle pressing needs, and express their worries and aspirations to the Government.

"Never break faith with the people," he said.

Sharing the letter on Facebook, PM Lee said: "Whether or not we are in a pandemic, our responsibility as MPs is clear. We are servants of the people, and will carry out our duties with integrity, honesty and incorruptibility. We will always be sensitive to the views and attitudes of the people we represent, and conduct ourselves with humility, modesty, decorum and dignity."