SINGAPORE - Singapore's leaders are doing their best to ensure the ongoing leadership transition will be as smooth and sure-footed as previous changing of the guard, said Prime Minister Lee Hsien Loong.

He said on Thursday (Nov 8) that the country has to entrench a culture of leadership self-renewal and cohesive teamwork in its political norms.

"It is not just about finding the right successor: We need to assemble the right team to lead Singapore," he added.

PM Lee was speaking about leadership renewal at the launch of Emeritus Senior Minister Goh Chok Tong's authorised biography, which details the transfer of power from Singapore's first generation of leaders to its second, as founding prime minister Lee Kuan Yew handed over the reins to Mr Goh in 1990.

The book, Tall Order: The Goh Chok Tong Story, is particularly timely as a major theme in it is leadership renewal, PM Lee said, even as the current 4G leaders are being groomed to take charge in a few years' time.

PM Lee noted that it was not easy for the 2G leaders to fill the shoes of Singapore's founding fathers, "who loomed larger than life in the hearts and minds of Singaporeans". 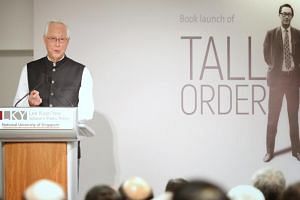 Excerpts from Goh Chok Tong’s biography: Lee Kuan Yew 'never meant for me to be a seat warmer'

Many, including some members of the Old Guard, doubted whether these “technocrats” had "fire in the belly", and the political charisma to mobilise the nation, he added.

But Mr Goh, now 77, wisely resolved to be himself, said PM Lee, and not try to be a copy of Mr Lee Kuan Yew.

"Quietly but confidently, he established his own leadership style, one that resonated with a new generation of Singaporeans," PM Lee said.

"Over time, Chok Tong showed that he had the ability and political gumption to make difficult decisions and carry the ground. The early doubts faded away, and Singapore carried on steadily in a new era."

Singapore made a similarly uneventful transition when Mr Goh decided to retire as prime minister in 2004, PM Lee said.

"Again there was change, but there was also continuity. This is something that rarely happens elsewhere, and we should not believe that it will always happen in Singapore," he added.

He noted that Mr Lee Kuan Yew had to retire many comrades when he brought in Mr Goh and the other second-generation leaders.

It was a difficult and painful task.

"Some of the stalwarts felt that they still had much to contribute, and should continue in harness for a while longer," PM Lee said. "But ultimately, they agreed to step aside. They accepted the broader objective of bringing in fresh blood early, and understood that a new generation needed to be trained and tested."

The 2G leaders were then put into key ministerial positions, he said, to learn to work together, develop their own leadership styles, and earn the confidence and trust of Singaporeans.

Mr Goh was on the lookout for young leaders long before he took over, and as prime minister continued to bring in new people, PM Lee said.

PM Lee said he too has inducted many younger ministers over the years, and tested them in different portfolios.

"The next team is shaping up," he said. "They are taking charge of sensitive issues and tough conversations with Singaporeans, making themselves and their convictions known to the people, developing rapport with voters and winning their confidence."

PM Lee also shared anecdotes of his interactions with Mr Goh, whom he has known for more than 40 years.

He recounted how Mr Goh sent him slides of a kite-flying competition in Marine Parade, for a presentation he had to make on Singapore during his studies at the staff college in Fort Leavenworth in the United States. PM Lee then wrote to Mr Goh to thank him.

“Even though both of us recall these interactions, I am sure neither of us expected that we would go on to have such a long engagement, spanning more than half our lives.”

PM Lee said he worked more closely with Mr Goh when he was posted to the General Staff in the Ministry of Defence (Mindef).

As defence minister, Mr Goh would chair HQ meetings held every Monday morning, to discuss the many issues involved in running and growing the Singapore Armed Forces.

The SAF made considerable progress in the years that Mr Goh was defence minister, PM Lee said.

"It was while I was working under Chok Tong in Mindef that he asked me if I would join politics. I agreed, and that set me on a different course and a long partnership with him," he added.

PM Lee was Mr Goh's deputy for 14 years from 1990, before he took over as Prime Minister in 2004. Mr Goh stayed on in Cabinet as senior minister, before retiring in 2011.

"It has been a long relationship, productive and harmonious. Chok Tong began as my mentor; we became comrades; we remain lifelong friends," PM Lee said.

"We have somewhat different temperaments and instincts, but we complemented each other well. We developed a strong partnership, not just between the two of us, but also across the team."

He said that as a leader, Mr Goh does not make up his mind in a hurry, but is firm and steady when a decision is made.

Another of Mr Goh's strengths is the ability to get capable people to join his team and work for him, PM Lee added.

"As Prime Minister, he assembled some of the strongest Cabinets Singapore has had," said PM Lee of Mr Goh.

"But Chok Tong's Cabinets had heavyweights in many ministries. The task of governing Singapore had become more complex, and it was no longer possible to run the whole government by relying just on a few key ministers."

"We often had different opinions, but there were no factions in the Cabinet. Everyone saw themselves as part of one team, striving to achieve the best for Singapore."

The book launch at the National University of Singapore’s Bukit Timah campus was attended by more than 100 people, including current and former Cabinet ministers such as Old Guard leader Ong Pang Boon and former President Tony Tan.

The biography, written by former Straits Times news editor Peh Shing Huei and published by World Scientific, is the first of two volumes.

PM Lee said that through this first volume, readers will discover the human being behind Mr Goh's public persona and understand how the personal hardships he experienced shaped his world view and imbued him with a strong sense of duty.

"I am sure Singaporeans will enjoy the book as much as I did. I sat down and read it in one sitting. It has many captivating stories to tell, many life lessons to impart, and many insights into different aspects of our nation-building."