SINGAPORE - This is a timeline of events in the making of the late founding Prime Minister Lee Kuan Yew's wills and the execution of his last will, which Prime Minister Lee Hsien Loong described in a statement issued by his lawyers on Thursday night (June 15) giving an edited summary of what he told a ministerial committee.

Aug 20, 2011: Mr Lee Kuan Yew's first will - first among seven versions - is made. It is prepared by Ms Kwa Kim Li, a cousin of Prime Minister Lee Hsien Loong and a lawyer at Lee & Lee, the firm co-founded by the late Mr Lee and his wife Kwa Geok Choo.

All three children are given equal shares of the estate. The first will also contains a clause stating the late Mr Lee's wish for the house at 38, Oxley Road to be demolished immediately after his death or as soon as his daughter, Dr Lee Wei Ling, had moved out.

Nov 2, 2012: Mr Lee's sixth will is made by Ms Kwa. It does not include the demolition clause found in the first four versions. Dr Lee is given an extra share of the estate relative to her brothers.

Dec 16, 2013: Mr Lee Hsien Yang's wife Lee Suet Fern e-mails Mr Lee at 7.08pm with a draft of the last will, which she tells him ensures that all three children receive equal shares. This version also includes the demolition clause. She asks Ms Kwa to engross the document.

Twenty-three minutes later, at 7.31pm, Mr Lee Hsien Yang e-mails his father saying he cannot get in touch with Ms Kwa and believes she is away. He suggests it is unwise to wait for her to return and that Mr Lee should proceed to sign the will. 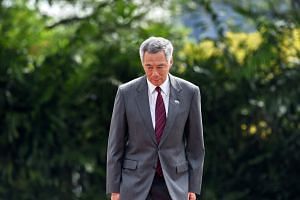 He says his wife "can get one of her partners to come round with an engrossed copy of the will to execute and witness".

At 9.42pm, Mr Lee replies to Mr Lee Hsien Yang and agrees to sign the new will without waiting for Ms Kwa.

April 12, 2015: Mr Lee's last will is read to the family by Mr Ng Joo Khin, another lawyer from the firm of Mrs Lee Suet Fern.

She said Mr Lee had asked her to prepare the last will, but as she did not want to get personally involved, she had asked Mr Ng to handle it.

A dispute arises between Mr Lee Hsien Yang and PM Lee over the immediate demolition of the house at 38, Oxley Road, but is ended when Dr Lee says she wants to continue living there.

June 2015: Copies of the six wills preceding the last will are provided to the family by Ms Kwa.

Late 2015: PM Lee and his siblings reach an agreement in which he transfers the house to his brother at market value, on the condition that the two of them each donate half the value of the house to charity.

In an earlier proposal, PM Lee had offered to transfer the house to his sister for $1, but a resolution was not reached.

PM Lee donated to charity another sum equivalent to half of the value of the house. The Oxley Road house now wholly belongs to Mr Lee Hsien Yang.

The three siblings issue a joint statement about the donation and their hope that the Government will allow the house to be demolished, in line with their father's wish.