SINGAPORE - Prime Minister Lee Hsien Loong, in a televised interview last Sunday (Sept 5), gave the clearest hint of proposed changes to the law that would ensure a president from the minority races gets elected from time to time.

The special provision would come into play if there has not been a president of a particular race for a long time.

"You want a mechanism where, if you've had a long gap, then the next election - if you have a qualified minority candidate - is held only amongst a minority group," PM Lee explained.

In his National Day Rally speech on Aug 21, he touched on the need for presidents from all races so minorities feel assured of their place in society.

A nine-member panel set up last year to review the elected presidency submitted its report to PM Lee on Aug 17. It is due to be published this week.

Once the report is out, the Government will respond with a White Paper outlining its proposals before moving ammendments to the Constitution. Changes should be in place before next year's presidential election, PM Lee said.

Here are six things to know about the elected presidency.

Here are six things to know about the Elected Presidency.

1. How was the President previously appointed?

From 1965 to 1991, the role of the President was largely ceremonial. He was appointed by Parliament and served a four-year term.

2. How did the new system come about?

The idea of a new kind of President to help safeguard Singapore's financial reserves was first mooted by then Prime Minister Lee Kuan Yew during a walkabout in his Tanjong Pagar constituency on April 15, 1984.

He brought up the topic again during his National Day Rally speech on Aug 19 the same year.

The wheels were set in motion when Mr Goh Chok Tong, who was then Deputy Prime Minister, tabled the first White Paper - which contained proposals to amend the Constitution for an Elected President - in Parliament in July 1988.

With the Government deciding to go ahead with the legislation on the expanded powers of an Elected President, a second White Paper was put up in August 1990.

Following intense debate in Parliament, a Select Committee was formed to look into issues and make recommendations, before it presented its report to Parliament in December 1990.

The new Bill and its amendments for a President to be elected directly by the people were written into law from Feb 1, 1991.

3. What are the powers and responsibilities of an Elected President?

Each term of the Elected President lasts six years.

The Elected President is bound by the Constitution which gives him "discretionary, custodial power" in five areas:

* Restraining orders under the Maintenance of Religious Harmony Act

In these five areas, the President had only blocking powers and was not allowed to initiate decisions or policies.

During the global economic crisis in 2009, the Government sought then President S R Nathan's approval to draw a total of $4.9 billion to help cover Budget expenditure, which focused on keeping workers employed and helping cash-strapped firms get credit.

4. What are the qualifications required to be Elected President?

Besides being a citizen of Singapore and not below the age of 45, the required qualifications as stated in Singapore's Constitution are:

* Name must appear in a current register of electors;

* Must be a resident in Singapore at the date of his nomination for election, and for a total period of at least 10 years before the election date;

* Must not be subject to any disqualifications, such as being an undischarged bankrupt, holding an office of profit or possessing a criminal record;

* Satisfy the Presidential Elections Committee that he is a person of integrity, good character and reputation;

* Not a member of any political party on the date of his nomination for election;

* Has held office for a period of not less than three years either as:

- A minister or a top-ranking official in the civil service;

- Chairman or chief executive officer of a statutory board;

If elected, the President must not actively engage in any commercial enterprise, must vacate his seat if he is a Member of Parliament and cannot be a member of any political party.

5. How many Presidents have been elected under the new system?

Three. The first was former Deputy Prime Minister Ong Teng Cheong. He ran against former banker Chua Kim Yeow and received 58.7 per cent of the vote, serving a six-year term from 1993 to 1999.

Succeeding Mr Ong was former civil servant S R Nathan, who was elected unopposed in 1999. He ran for a second term in 2005 - he was again the only eligible candidate - and became Singapore's longest-serving President in 2009.

6. Why is there a need to tweak the system?

Some commentators say that the most recent presidential election in 2011 has been viewed as more divisive than unifying, citing the slim winning margin. 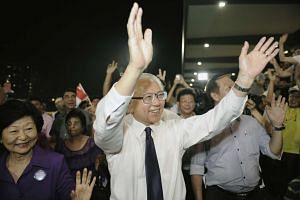 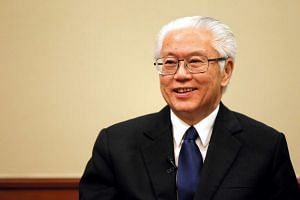 Mr Lee, in his speech in Parliament, noted how some of the candidates had campaigned for office as if they were going to form an alternate Government.

Others point to the confusion over the role of the Elected President.

An Institute of Policy Studies poll of more than 2,000 Singaporeans after the election found that four out of five wrongly assumed that the President ensures that the Government manages the economy wisely. Three in four mistakenly thought he was free to speak publicly on national issues he deemed important.

Mr Lee clarified that the President is neither the Government nor the opposition, likening him to that of a "custodian" and "goalkeeper".

"For the system to work, both candidates and voters have to understand this because otherwise if you have a President who thinks that he is the Government, competing with the Government, you have two power centres in the system," he added.

"At the very least you have confusion, you could have an impasse between the two and the democratically elected Government will be undermined."