SINGAPORE - Prime Minister Lee Hsien Loong and his Malaysian counterpart Tun Dr Mahathir Mohamad on Monday (Nov 12), looking deep into the past, spoke of the strong ties between their two countries, at a lunch to welcome the Malaysian leader on his first official visit in his current stint as PM, to Singapore.

In his speech at the Istana event, PM Lee noted that while the two-day official visit is his first as Malaysia’s seventh prime minister, Dr Mahathir is very familiar with Singapore.

He has visited the Republic many times and also collaborated with it on projects with lasting benefits for both nations, PM Lee added, citing the Linggiu Dam in Johor and the Second Link in Tuas.

PM Lee, speaking at the lunch, said they had a good meeting and discussed ways to deepen cooperation.

“Malaysia is Singapore’s closest neighbour and vice versa. We are bound by geography and history. Our economies are extensively intertwined,” PM Lee said.

“Our relationship is further strengthened by bonds of kinship, friendship and memories. We all have friends and relatives who live, study or work across the Causeway, and we feel at home when we visit each other,” he added.

Some of Singapore’s Cabinet members were born and raised in Malaysia, PM Lee noted, while several Malaysian ministers were born here, grew up or studied here.

“And when we are overseas, we can pick each other out by how similarly we speak, dress and behave. The connection is instant,” he said.

PM Lee said for Singaporeans and Malaysians, himself included, many of their best memories were made in each other’s countries.

“My first family trips with my parents were to Cameron Highlands,” he recalled. “We would drive up to Kuala Lumpur (KL), taking most of a day, and break journey overnight, staying at the Railway Station Hotel because I was interested in trains.”

He recounted how the following morning, the family would drive from KL to Cameron Highlands, stopping along the way at the town of Bidor in Perak for wonton noodles made with fresh water prawns caught in mining ponds.

That was where they started their courtship, which led to a happy marriage of more than 60 years, he added.

“When we met in May 2018, Dr Mahathir spoke fondly about his time in the college and his old classmates whom he kept in touch with for many years, but had not seen for a while,” he added.

“So I am happy that NUS will confer an Honorary Doctorate of Laws on Dr Mahathir tomorrow, and many of his old friends will be at the ceremony,” he said on Monday. 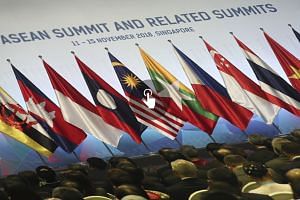 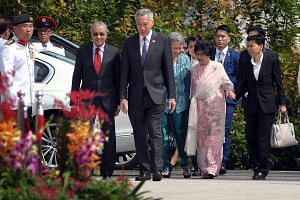 Dr Mahathir, in his speech, also underlined the close ties between both nations, saying they “are like twins in a way, except perhaps the elder twin is a little bit bigger than the younger twin and a bit older”.

“It is not often that we see countries which come together and are separated, and still work together and help each other,” he added.

Citing Singapore’s recent help, he said: “I wish to record here our appreciation for the help extended by Singapore during the present currency crisis we had recently.

“If there is any way we can return the hospitality, we will try to do so.’’

He added that the most important thing is to continue the good relations.

As would be the case between any two countries, there will be some differences and competition, he noted. “But the competition is always healthy – it helps us to make every effort to win, and this really helps us to grow even faster.”

Even so, Malaysia and Singapore are mutually dependent, he added.

“Singapore has no hinterland and must use Malaysia as a hinterland. On the other hand, for a very long time, Malaysia had to depend on Singapore for its exports and imports because Singapore has developed into a great port that is comparable to the greatest in the world. And we need the services of this port and other services related to trade and industry,” he said.

Dr Mahathir also said he very much appreciated that PM Lee was the second leader to visit him after his Pakatan Harapan coalition won the general election in May. The first was Brunei’s Sultan Hassanal Bolkiah.

“It was not a very formal visit – no parades, no inspecting of guard of honour but, nevertheless, the reception was sincere as can be,’’ he added.

Dr Mahathir, who will attend the Asean Summit in Singapore this week, also pointed out that together, Singapore and Malaysia can be very effective in helping the whole region to grow.

Noting that not many regional groupings have survived in the world, he said: “Asean has not only survived but continues to work very closely together and to grow.

“So there is much at stake in this relationship between Singapore and Malaysia, and I’m glad to make this visit and help in discussions with Mr Lee on our relations and how to improve the relations.

Singapore’s Ministry of Foreign Affairs said in a statement that the two leaders had a wide-ranging discussion on bilateral and regional issues of mutual concern.

It added that PM Lee emphasised Singapore’s intention to continue constructive, forward-looking relations with Malaysia and reiterated Singapore’s commitment to build on their strong cooperation and find new areas of collaboration for the the benefit of their people.

PM Lee also expressed his appreciation to Dr Mahathir for Malaysia’s support for Singapore as Asean chair and both leaders agreed to work together to continue strengthening the regional grouping, the statement added.