Strength in engineering, leaders who understand tech, a society that doesn't fear science or tech

It is no secret that Prime Minister Lee Hsien Loong is a techie.

Yesterday, he revealed that he puts his tech skills to good use as a mystery shopper on government websites, in a bid to help the Government improve its online services.

"Our mystery shoppers to government websites are kept busy, and once in a while, I join them myself," he quipped, to laughter. "It is not just improving the software, but rethinking and streamlining the underlying processes to focus on the essential requirements, and deliver the services in a customer-oriented way."

PM Lee was speaking at yesterday's Smart Nation Summit about what the Government has done so far to realise Singapore's Smart Nation vision outlined five years ago.

While the country has a strong base to become a Smart Nation - a technologically literate population, good IT infrastructure, and the Government taking the lead - there are areas in which it can do better, he said.

He cited three ingredients he said were necessary for Singapore to succeed in its vision to use technology to improve the quality of life for all.

First, Singapore must have very strong engineering capabilities, and must be able to attract and recruit engineers of the same calibre as those working in the best tech companies in Silicon Valley and elsewhere, he said. 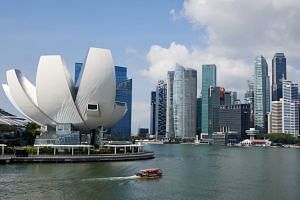 Singapore has to constantly reinvent - and even cannibalise itself: PM Lee Hsien Loong

Second, Singapore will also need more leaders and managers who know "what is real, what is snake oil, what is a buzzword and what is a promising solution", both in the Government and in the private sector.

Third, said PM Lee, society needs to embrace science and technology, and not fear it.

"The Singapore ethos of our society has to be rational and transparent, able to examine and solve any problem rationally, be prepared to apply solutions which work even if they are unconventional and use new approaches," he added.

"People have to understand the risks of technology, whether it's cyber security, whether it's privacy, or online falsehoods. But our people must not be anti-tech or anti-science, because that would hold back progress and it will be the end of us."

He cited the Digital Readiness Blueprint launched by the Ministry of Communications and Information last year to improve Singaporeans' access to technology and help them learn how to use digital technology safely.

"It is applying technology to solve real problems that will make a difference to people's lives, across the whole of society," he added at the event at Sands Expo and Convention Centre at Marina Bay Sands.

To this end, the Government has been building the basic infrastructure on which applications and services can be developed, such as the National Digital Identity, which will allow people to log in securely to access government services online.

The Government has also launched projects to address concrete problems, and started experimental projects for Singapore to learn quickly about whether novel technology, such as artificial intelligence, will fail or succeed here. 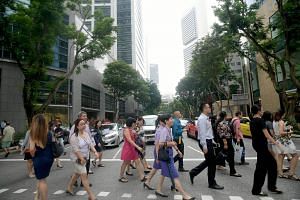 Noting the popularity of services such as online passport applications and tax payments, PM Lee said: "But we can do much better, certainly for government services."

While the Government was an early adopter and was one of the first governments in the world to computerise, digitise its data and move services online, it now has many legacy systems that need to be upgraded, PM Lee said.

He added that the Government also has to keep up with technology to transform how it develops applications and delivers services, for instance by using cloud services or centralising development, instead of having every agency build its own website or system at great expense.

PM Lee called on the private sector to play its part, adding that there are many opportunities, especially in the financial services sector.

Wrapping up his speech, he said: "We are determined to achieve our Smart Nation vision. It is an essential strategy if Singapore is to remain an outstanding metropolis, abreast of the other centres of human creativity and enterprise."

In a dialogue after his speech, in response to a question on how the Government will ensure no one is left behind, he stressed the importance of helping older Singaporeans access services online. "We have to make a big effort to carry them along, make sure that they feel they get the help they need and they don't feel they are left behind."

Asked what young Singaporeans can do to capitalise on the growing tech sector, PM Lee advised them to take advantage of the educational opportunities available before they "go out and change the world".

"First, master a trade, don't lightly drop out of university. I mean, if you're going to be Bill Gates, or Steve Jobs or Mark Zuckerberg, by all means... if not, master a skill, make the most of it. At some stage, if you want to start something, I say go for it," he said, referring to the founders of Microsoft, Apple and Facebook, respectively, who cut short their education to start their companies.