SINGAPORE - The Rohingya refugees who fled Myanmar need to have sufficient confidence before their repatriation can start "in a voluntary, safe and dignified way'', said Foreign Minister Vivian Balakrishnan in Parliament on Wednesday (Feb 13).

He made the point when explaining why it was not possible for Singapore or Asean to impose a deadline to start the process for repatriation.

But when it happens, Asean will stand ready to support the refugees, in providing or helping to provide healthcare and education facilities, and the promotion of interfaith dialogue, he added.

But the more difficult and fundamental issues in the Rohingya crisis involve such challenges as citizenship and political rights, said Dr Balakrishnan in his reply to Nominated MP Anthea Ong.

Again, these are issues that Asean cannot decide or debate on. "We cannot do so on behalf of Myanmar and, ultimately, Myanmar has to sort out its own political challenges," he told the House.

More than 700,000 Rohingya Muslims fled a sweeping army crackdown in Myanmar's Rakhine state in 2017. Many now live in cramped conditions in camps in Bangladesh.

In October 2018, Bangladesh and Myanmar agreed to repatriate hundreds of thousands of refugees. But the plan has been opposed by the Rohingya as well as the United Nations refugee agency and aid groups, all fearing for their safety. 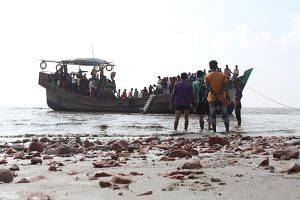 The repatriation planned for November 2018 also stalled amid protests at the refugee camps.

Dr Balakrishnan said that at the recent Asean Foreign Ministers' Meeting in January, the subject of the Rakhine state came up for extensive, informal discussions among the leaders.

"We focused on efforts by Asean to support the refugees as well as Myanmar, and, in particular, focused on the safe and voluntary repatriation of these refugees," he noted.

"We welcome the finalisation of the terms of reference of the needs assessment team, that will be dispatched by the Asean Coordinating Centre for Humanitarian Assistance," he said.

Dr Balakrishnan said the team will help identify the areas through which Asean can provide support and also enhance the trust and confidence of the refugees on the ground.

But the deployment of the needs assessment team has had to be postponed, owing to the recent outbreak of violence involving the Myanmar military and the Arakan Army, which is a militant group calling for greater autonomy for Rakhine state.

"It's important for the refugees, ultimately, to return home so that they can rebuild their lives, but I would emphasise it is just as important that the manner of the repatriation be voluntary, safe, dignified and sustainable.

"I have met the Prime Minister of Bangladesh and also the State Counsellor of Myanmar just two months ago, and I am absolutely certain that the leadership of both countries is committed to the ultimate repatriation of the refugees," Dr Balakrishnan said, referring to Ms Sheikh Hasina and Ms Aung San Suu Kyi, respectively.

Mr Louis Ng (Nee Soon GRC) asked if the issue of citizenship for the refugees could be discussed by Asean at a deeper level.