SINGAPORE - National Development Minister Lawrence Wong addressed the controversy over the high fees paid to consultants of a centralised refuse collection project in the Civic District on Monday (Aug 15), saying that the project was delivered satisfactorily and at acceptable cost.

He also pointed out that the Auditor-General's Office did not conclude the consultant was overpaid.

Instead, the AGO was concerned about the process by which the consultancy fees were assessed, said Mr Wong, responding to a parliamentary question from Nominated MP Kok Heng Leun.

Mr Wong was responding on behalf of Minister for Culture, Community and Youth Grace Fu, who is in Brazil at the Olympic Games.

The AGO had flagged the issue of the fees in its latest annual report. It noted that the $410,000 paid for the consultancy study was nearly 90 per cent of the cost of actually building the bin centre, which cost another $470,000. 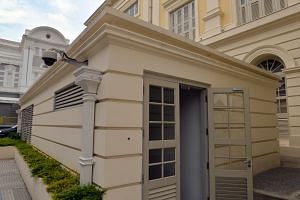 In Parliament on Monday, Mr Wong said the scope of the consultancy services paid for was much more than was typical for a bin centre as an extensive technical feasibility study had to be done.

The original plan was to have a standalone bin centre for Victoria Theatre and Victoria Concert Hall, but it was later decided that it would be better to build a centralised centre that served other buildings in the area.

The study was needed due to the historic nature of the buildings in the area, said Mr Wong.

In addition, he added, the consultancy quotation was assessed and found to be within the range of consultancy fees for other complex projects in the vicinity.

The total consultancy cost of the entire project to redevelop the Victoria Theatre and Concert Hall - 8.7 per cent of total development costs - was within the industry benchmark of 10 per cent, he said.

He added that the project's contractors had quoted a construction cost of $890,000 initially, but the consultant did "extensive value engineering which brought the final cost down to $470,000".

When asked by Ms Lee Bee Wah (Nee Soon GRC) if MCCY would have decided differently on hindsight, Mr Wong said the ministry would have made the same choice.

He added that as the National Arts Council had decided "it would be better to pay a lump sum fee for the consultancy services to limit any potential escalation of costs".

This was because it was not clear what form the final refuse collection point would take and how much it would cost to construct it, said Mr Wong.

He also said MCCY acknowledges that more detailed documentation should have been provided to clearly explain the scope and complexity of the project.

The ministry will ensure that such justifications are set out fully in future, he added.