"We look forward to receiving him," Dr Balakrishnan told the House during the debate on his ministry's budget.

He did not give more details of the expected visit, but in recent years America's presidents have attended the East Asia Summit held at the end of every year in conjunction with the Asean Summit.

Singapore, which is chairing Asean this year, will be hosting the year-end Asean Summit, East Asia Summit and related meetings.

Last November, Mr Trump attended the regional summit in Manila as part of his marathon trip across Asia.

International relations watchers pointed to Mr Trump's attendance at the forum as a sign that the US remains committed to the region, contrary to fears that the superpower would become more isolationist after Mr Trump was sworn in as President in January 2017.

The US is a longstanding partner with whom Singapore has had strategic and mutually beneficial relations over the last 52 years, said Dr Balakrishnan. 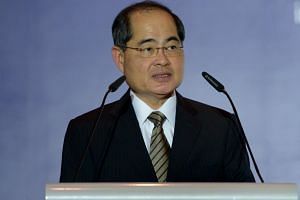 He added that Singapore's strong trade, investment and business ties with the US are underpinned by the free trade agreement between the two, signed in 2004.

In his speech, the minister gave an overview of the major foreign relations challenges facing Singapore, and its relationships with its close neighbours and other regional powers.

He said that Singapore must preserve its ability to make independent decisions based on its national interests and not become a vassal state.

"We're not for sale, and we're not going to be easily intimidated," he said.

Singapore also aims to be a friend to all and does not wish to be forced to choose sides, or to be caught in proxy battles, he added.